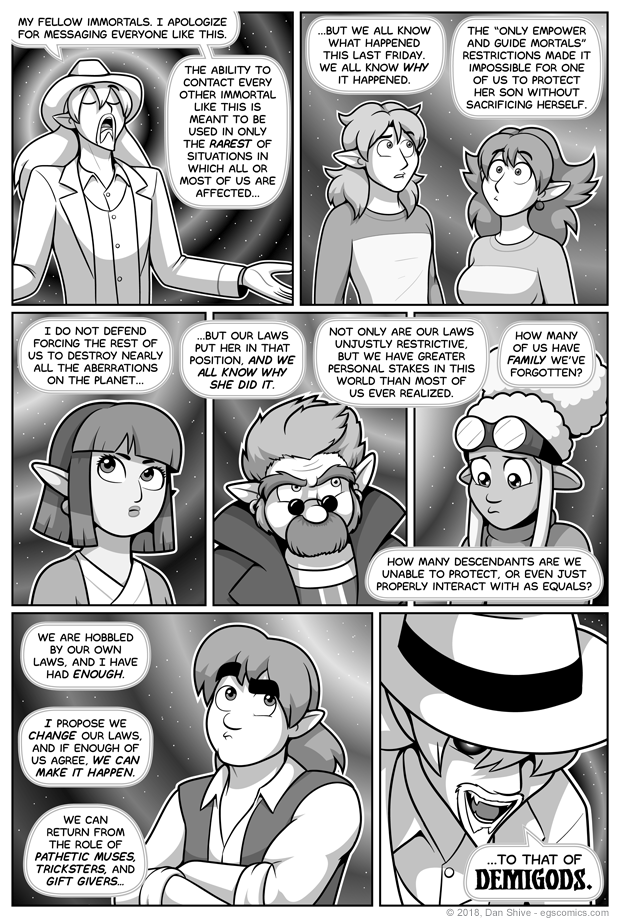 - "The only way to break immortal law is to do so intentionally" (It's not as simple as convincing others they're not breaking the rules. They have to genuinely believe it themselves.)

- Immortals not knowing they can have grandchildren (and beyond)
- "We'll know what she did. Why she did it." (Page after previous one)
- Pandora kills all the aberrations at the mall
- Why she took out as many other aberrations as she could

- "Immortal law will change" and "demigods"

Pandora didn't just take out most of the world's aberrations. Her motivation for doing so automatically told every immortal on Earth that they could have generations of descendants, something the vast majority of them did not know.

Voltaire's Plan A, meanwhile, was to traumatize Tedd so badly as to guarantee he wouldn't prevent magic from changing, and using that change, and the growing public awareness of magic, as the basis for calling for a change.

Not nearly as a strong an argument to make to every immortal on Earth, but it is worth noting he referred to the Pandora sacrifice plan as plan "Complicated Mess" for a reason, and it did metaphorically involve poking the world's biggest and smartest bear with a stick by threatening her cub.

People who are up to date on EGS:NP will recognize Hanma from Goonmanji 2 (a non-canon storyline with a LOT amount of transformation and skimpy outfits, fairly warned by ye). This comic finally makes the character herself canon.

I had promised to establish Hanma as canon at the first opportunity, which could have been during "the apocalypse". I decided that would be a HORRIBLE moment to use to make Hanma canon, so that waited for this page.