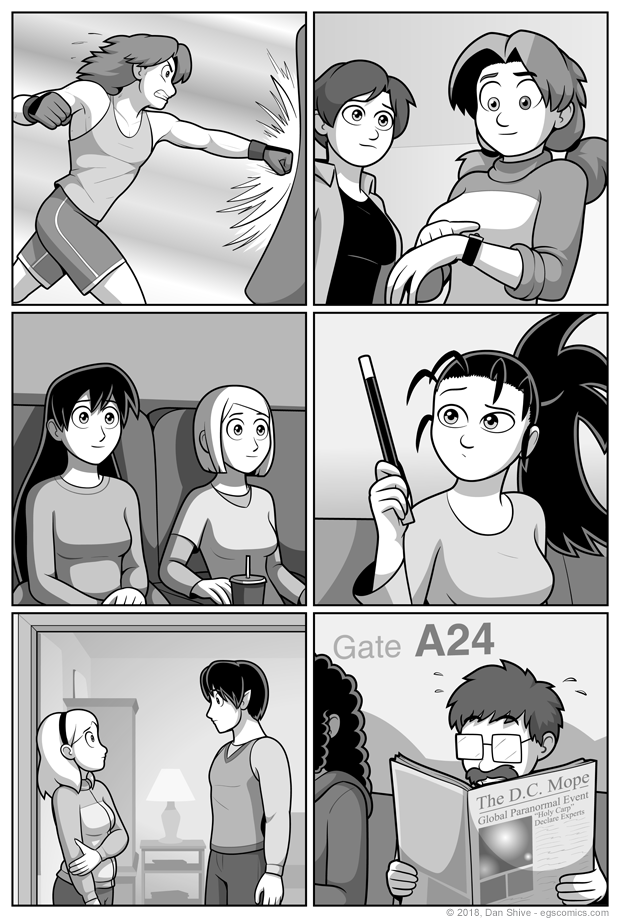 Posted July 27, 2018 at 4:23 am
- Elliot power up
- Ellen watch for hair and eyes
- Hanging out introvert style with Diane
- Ashley and Kevin
- Sarah meeting with Raven
- When last we saw Mr. Verres and a Newspaper 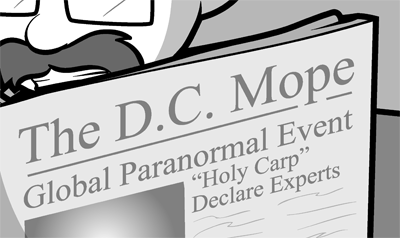 Two pages in Sister 3 remain. As for THIS page...

I've punched a punching bag without gloves. More times than I should have, really, because I thought I was being a cool guy.

My hands have yet to forgive me.

While I actually was considering giving Elliot a haircut, the people who seemed to care about Elliot keeping his hair long were a) more numerous and b) more passionate about it.

Besides, I set up Diane getting a haircut, and I've established other characters criticizing Elliot's hair, which I like the idea of being a thing.

What I wanted to do was to show Ellen's transformation mid-stage, going from her left (where the watch is) to her right, as a way to compare her old and new hair / eyes.

What I anticipate is questions about whether whether she can just stay half-and-half like that.

My one regret is that it didn't look like this when we saw her at the barber, as I only THOUGHT I'd finalized her hairstyle then. It's more potentially confusing than it should be this way (but not so confusing that I'm going to go back and try to edit that comic instead of working on new things).

Ashley's feelings about all sorts of things right now are complicated.

"Oh hey, cool wand! And I'm a wizard! Let us never speak of how that came to be."

Way to include spoilers for a future storyline, ME!

I hope a gate designation is enough to indicate that he's at an airport. It probably is. Unless it isn't. Well, that's where he is, darn it.

Anyway, I feel you, Mr. Verres. That's the face I make when I read the news, too.