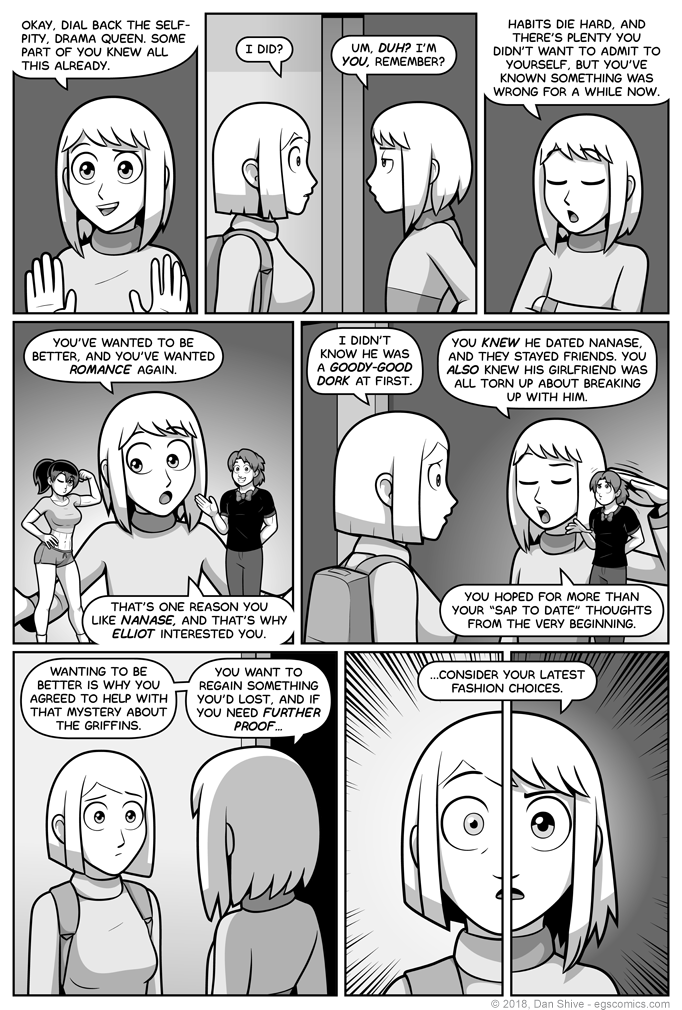 - Original excuse for mystery solving: "...It was either this, or a meaningless double date with Lucy." (retroactive OUCH on that one)

"But her hair and outfit isn't EXACTLY the same."

It's close enough to be significant, and besides, would you REALLY prefer this scene with them being harder to tell apart?

...Darn it, I should have imagined a more understanding hypothetical reader.

I didn't want it to be THAT on the nose. I wanted the connection to be possible to make, but not too obvious. Also, that concern about telling them apart, both here and during the initial flashback, was real.

ANOTHER reason, which I'm sure some will appreciate, was that I wanted to experiment with Diane's hair, and see if I couldn't find something I like more than present her has now. Personally, I think her inner child's got a better haircut going, and I also like her hair during the movie date (which was more like what present Diane has, but longer).

In any case, I like ideas that cover up her face less than her original hairstyle.

Panels four and five didn't originally have any visual representation of these two, and I wasn't sure how to make the panels visually interesting.

Then I remembered Diane was imagining this, and BAM! Visual representations of Nanase and Elliot specific to Diane. Huzzah!

And yes, Elliot is ROCKING that bowtie!

I should clarify that Diane subconsciously emulating her younger self, and dressing warmly in cold weather, is not a condemnation of people wearing sexy and/or revealing outfits.

I consider the outfit similarities something of an afterthought, particularly given the focus on her hair, but no, I'm not accusing such outfits of being evil or bad if one wishes to wear them.

This is especially true given other characters I've shown wearing them, and the fact that Grace would wear even less if she could get away with it.