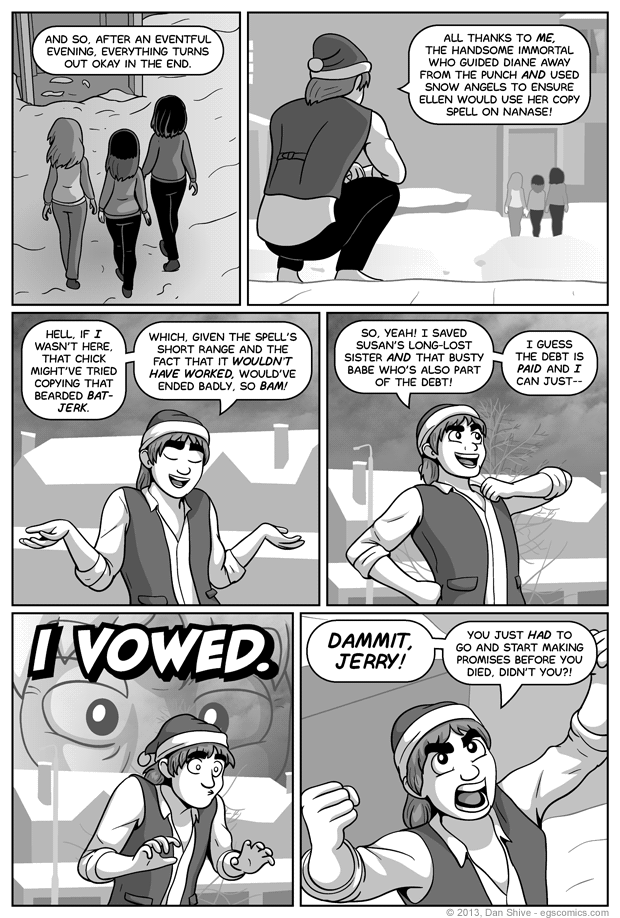 - The start of Hammerchlorians
- Susan's trip to France (relevant to *why* there's a debt)
- Susan's fairy doll summon (a reference comic for subsequent reference comics?! Reference-ception!)
- The introduction of Jerry
- Jerry's debt to Susan
- "I will know of you, but I won't remember you."
- Nanase and Susan after having just discussed the events of the trip
- The busybody (Jerry?) comic again
- Nanase speculates about the busybody
- Snow angels
- Ellen's first beam failing to affect Not-Tengu

It's possible I just directly lifted some of those comic reference links from a previous comic commentary, because why the heck not? It's the comprehensive Jerry list.

I'm trying to remember if I've listed all the reasons why Ellen didn't copy Not-Tengu in a proper commentary, but really, the two reasons given in this comic are the big ones. The issue of range is something I'm a bit embarrassed about, as I never properly established the limitation. The relatively short range has been consistent, but it's never been explicitly stated that "yo, this has limited range".

In any case, the limited range would have meant getting close to someone that could probably defeat her in one hit. That wouldn't have been a good idea even if it was likely to work, which it actually wasn't. Ellen's first beam failed due to Not-Tengu's high resistance, and the copy beam would have failed as well.

I think some people thought of it as working differently enough that resistance wouldn't apply, but in order to copy something, one still has to scan it. If the scan can't get through, there can be no copy. Ellen simply would not have been able to assume the form of Not-Tengu for the sake of perfectly symmetrical combat, and she would have had to have gotten closer to try.