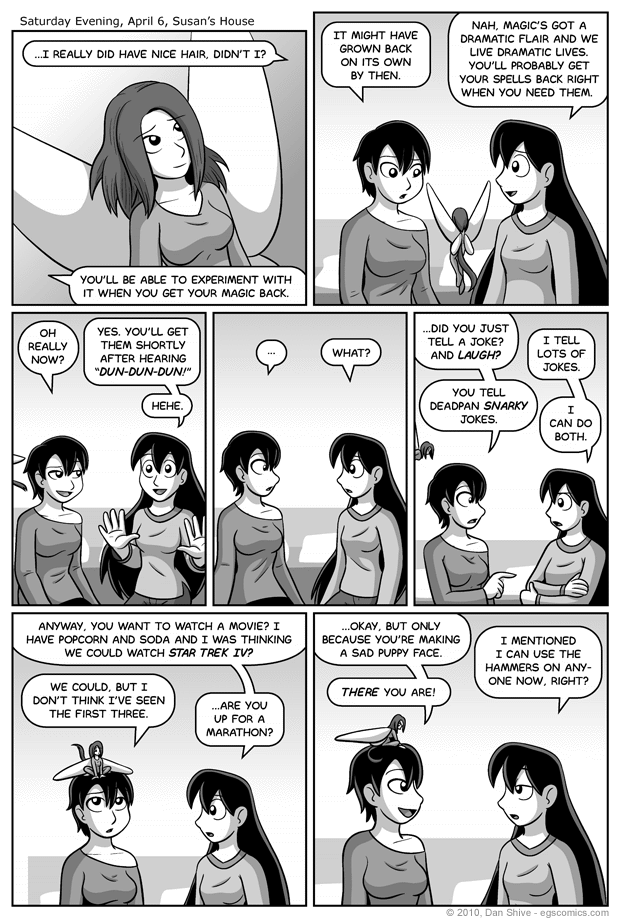 Posted August 5, 2010 at 1:00 am
I was very undecided as to whether I should include this moment with Nanase and Susan in Hammerchlorians. If the storyline existed in a vacuum, I probably would have ended it with the previous comic.

Given upcoming storylines and who will and won't be featured in them and when, however, I decided I wanted this moment of Susan at least trying to be upbeat before moving on. Besides that, while Nanase was only present for one other comic in the storyline, the events within it do ultimately impact her and I felt she deserved at least one scene with her fairy doppelganger on her head.

There are some minor details I don't bother getting into in this comic. Given the last panel, it's safe to say this comic takes place after Susan has filled Nanase in on what happened in the cave. It's also apparent that Susan has already seen Justin, as her hair is back to a normal length. That, or she got it cut elsewhere. Either way, I felt implying these things was a better approach than direct exposition.

Susan was originally going to say that magic was a drama queen, but I decided that might be a really weird thing for her to say. I don't necessarily consider "drama queen" to be a sexist term (especially if one interchanges it with "drama king" when addressing men), but I can see how Susan would likely take issue with it.