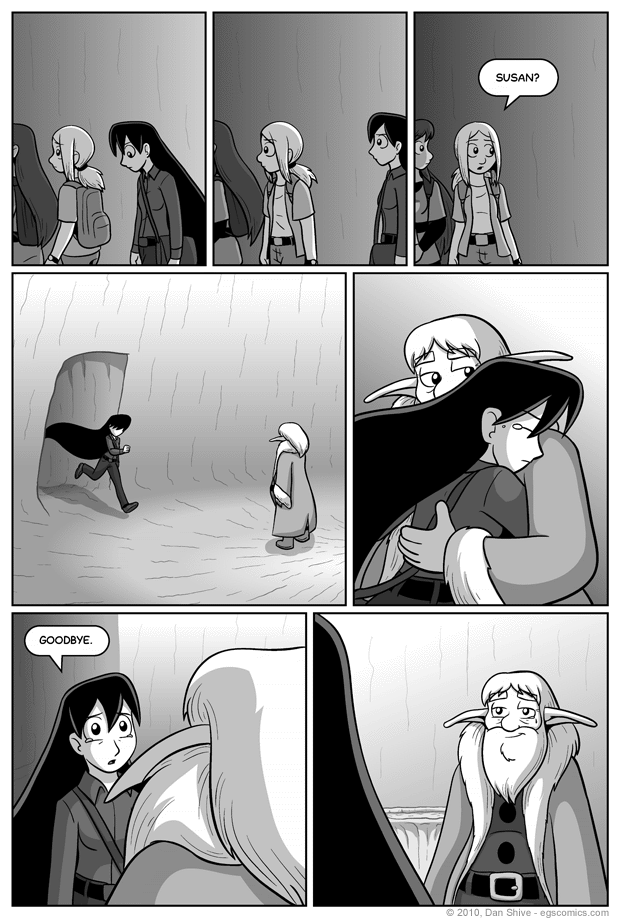 Posted August 2, 2010 at 1:00 am
What? I said the last comic possibly concluded the storyline! There was no guarantee to speak of, except maybe on Twitter when I totally guaranteed it and assured everyone I wasn't protesting too much.

I can't think of any specific examples of this sort of walk away without saying anything, pause, go back and give a better goodbye / say the right thing in other media, but I'm fairly certain this has to be some sort of trope. Regardless, I felt there needed to be hesitation to the point of almost missing her chance to actually say goodbye.

Before anyone asks, Grace is still carrying the artifact. I know just a tiny bit of the base is visible in panel three, but it's there.

Something I forgot to mention in the previous comic's commentary (and almost forgot to mention AGAIN) was Grace's line about Susan's fairy vanishing. The fact that the fairy vanished during the angst-splosion could have been revealed in a better way, but there's a reason it wasn't: the fairy unsummoning was the result of a rewrite.

I had originally planned for the fairy to stick around, but I kept finding myself leaving her out of panels. Then I realized that showing Susan's emotions via the fairy was counter-productive to what was happening with her character, so I stopped trying to find places to include the fairy.

While finishing up the previous comic, I realized that the missing fairy was going to become a big unexplained plot hole and that I had one last logical shot at inserting an explanation, which was at the point when the girls were gathering up their things to leave. Grace's line is basically her confirming her suspicions that there is no fairy left to bring with them.

It was an imperfect solution, but pretty much the only one I had left myself. If I didn't explain its whereabouts, some people would be wondering why I had left it vague and start speculating about what problems the missing fairy might cause, turning it into a very unintentional red herring.