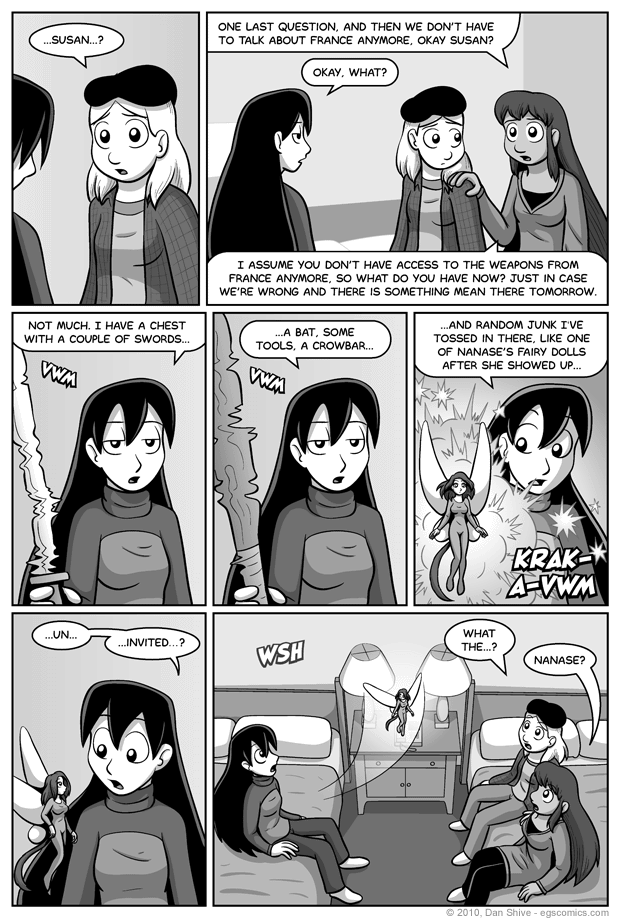 People can tell me if I have failed in this regard, but my intent was to imply that Susan did not answer Sarah's question. I had hoped to establish with an earlier joke that the narration was literally what Susan was saying, and anything else being shown was for the audience's eyes only.

...You know, I put up a simple placeholder commentary for this comic last night, but this actual commentary is winding up pretty darn short. There's not much I can say that wouldn't be spoilers or "see? THAT'S why the spell doesn't just summon weapons", etc. So instead, I will immortalize some of my tweets from this evening.


[quote]They're working on collars for pets that will automatically tweet their behavior. Imagine the following tweets while checking in from work:

"Sleeping on the sofa (master will never know)"

"A window just broke from the outside. A stranger has entered."

"Intruder dealt with. Lapping up blood."

"The hole is dug, the body has been deposited."

"Poop on grave for good measure. This prevents zombies."

I predict my tweets will one day be unearthed by an alien species and used as the basis for their planet's dominant religion. My only regret will be that I won't be around to see the sacred document that states "poop prevents zombies."