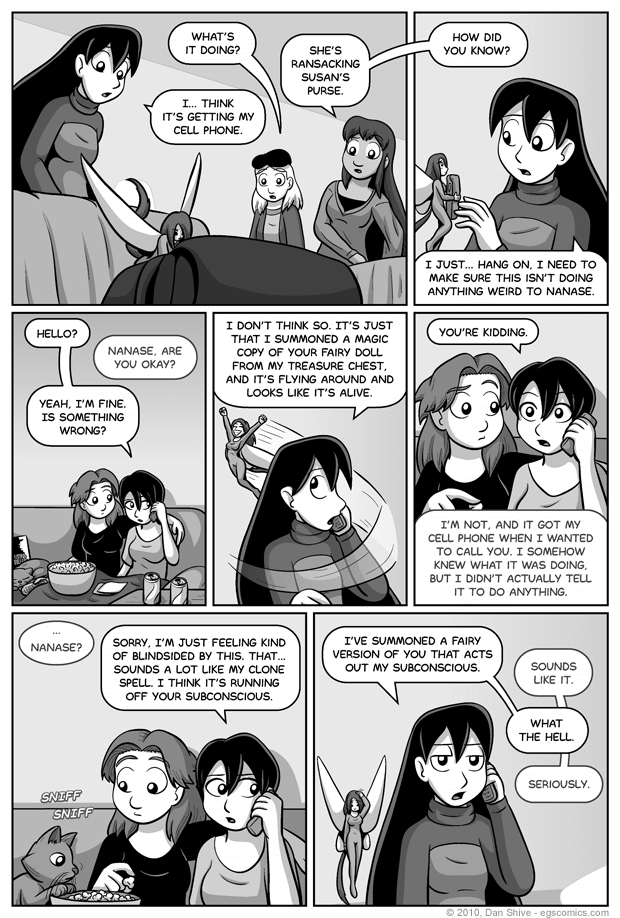 I'm not entirely pleased with the text layout in panel one of this comic. I made a few attempts to make it flow better, but it covered up art I didn't want covered up and remained a bit awkward. A rewrite or a completely different camera angle would be necessary to satisfy me, though the latter would likely annoy me just as much as I like the angle with fairy Nanase in the foreground and the others looming over her in the background.

And hooray! This storyline has had all eight of the main characters in it now! Granted, Tedd, Elliot and Ellen have done almost nothing, but they've been present, darn it!

The movie Nanase and Ellen were watching is A Fistfull Of Dollars. I tried to make the DVD case in panel three (behind Brownie the cat) recognizable, but I think I failed, at least with this low-res version. I haven't seen this movie yet, but I intend to soon. I'm on a bit of a Western kick thanks to the Red Dead Redemption video game (as I believe I've mentioned).

Ellen and Brownie were almost not included in this comic. Nanase was originally going to be practicing with a bokken, a wooden Japanese sword, which would vaguely tie into future comics but wasn't ultimately necessary. I decided I'd rather have her and Ellen cuddling up to watch a movie, but I'm still going to comment on the sword thing as I've got an itch to scratch about it.

I've occasionally seen people pictured as practicing swordplay on their own with shinais, which are bamboo Japanese swords. Correct me on this if I'm wrong, but it's my understanding that shinai are intended for training with a partner, while the bokken are heavier and used in solo training to strengthen the muscles used when wielding swords.

Hitting someone with a lighter shinai could still hurt, but the odds of serious injury are much less than when hitting someone with a bokken. I was once talking to a sword trainer who commented on an unrealistic scene in The Last Samurai where Tom Cruise's character takes a bokken to the head and quickly gets back up again. The trainer's basic response to this scene was "no", and as an owner of a red oak bokken, I have to agree. You could do some serious damage with one of those things.