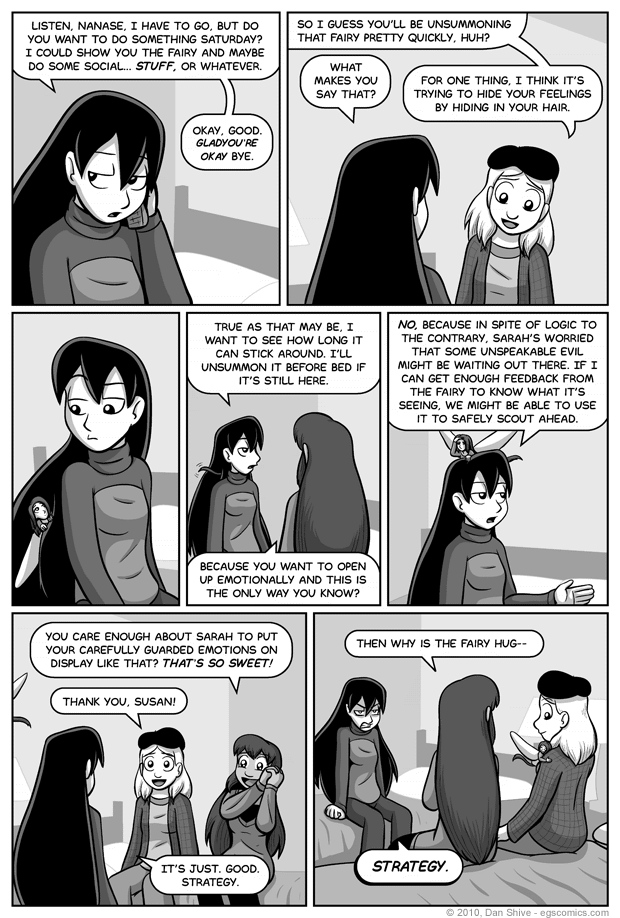 Posted June 7, 2010 at 1:00 am
I think it's safe to say that there's a particular aspect of Susan's subconscious that this fairy is acting on. Otherwise, it probably would have slapped Grace by now.

The fairy doll was originally going to just be hiding behind Susan, but seriously, why just hide behind her when there's a vast jungle of dark hair to hide in? If Susan could summon more fairy dolls, she could have a small gang in there to unleash on unsuspecting foes. She'd be all like "say hello to my little friends!" and BAM! Fairy punch barrage.

The previous comic sparked the debate of whether this fairy doll had any actual use. I think there are plenty of potential uses, most of which being dependent on how much feedback Susan can get from the doll. There are plenty of uses for it other than reconnaissance, but most of those uses would be less efficient than a non-fairy doll alternative.

Heck, if they had high-tech spy equipment and resources, those would outdo the fairy on reconnaissance, too. They could probably even outdo the fairy with low-tech resources if they had MacGyver or Michael Westen on their side. All that speculation aside, a general goes to war with the army she has, and her army is herself, a shapeshifter, a girl with a beret, and an embarrassing fairy doll. Go team Susan!