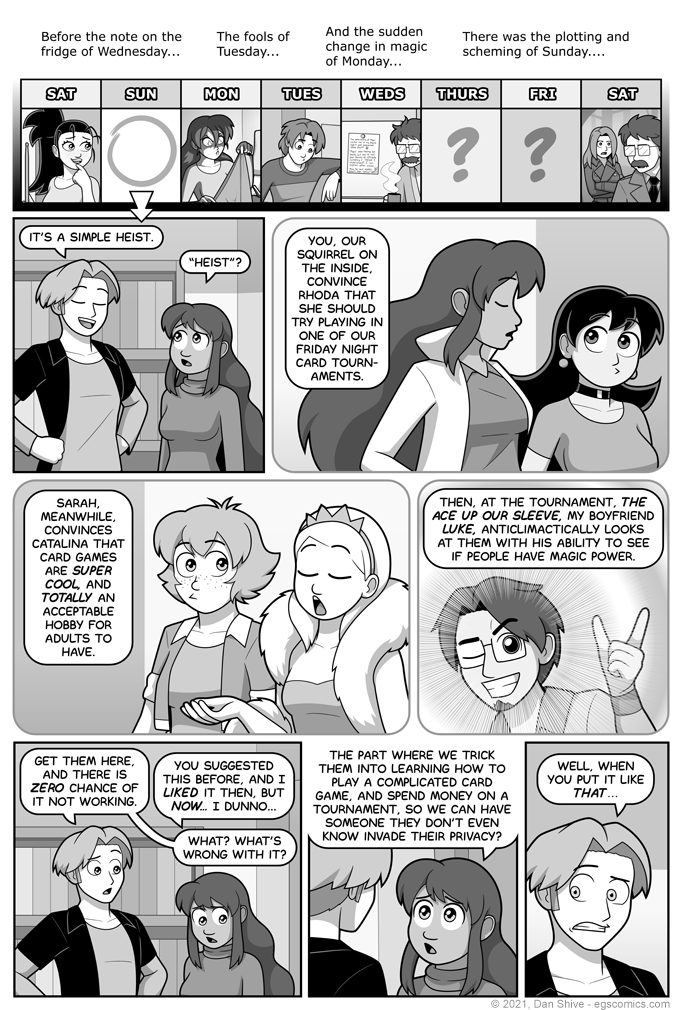 Done with such temporal nonsense, Part 2 of Balance can focus on its own thing, and what IT'S doing, rather than get interrupted by, well, EVERYTHING in Part 1.

Granted, stuff from part 1 may well come up, Monday is right there waiting to strike, but my point is it won't be a "hang on, we have to focus on this for several weeks now".

I bend the fabric of space and time for the sake of focus.

Morality Of The Plan

There are obvious issues with tricking one's friends like this that did not get brought up when Justin first suggested this solution. From my perspective, I didn't want to get in to those problems because it would have been tangential in that story.

Given Grace's desires and various other distractions, I think it's realistic that Grace would initially be hyped for Justin's plan, and only think of the moral issues with it later.

The original plan for this page was just a timeline, five panels, no fantasy panels, and I thought the timeline would take no time at all.

But then I decided the original dialogue was boring, I thought of framing the description like a heist movie, and it turned out the timeline took much longer than I'd expected.

For the timeline, I wanted to adjust the line weights of the scenes shown to look more natural and legible in the timeline. Simply copied from flat images, the lines would be really, really thin after being shrunk down.

I work in vector, so this is something I could do without re-inking each scene. It still turned out to be a headache, however.

It wasn't difficult, but it was time consuming. I didn't layer things on the previous pages with the intent of making it easy to move them to other pages (there's not normally any reason to), and it was like filling out lengthy-but-simple forms.

Then there was deciding exactly how to crop things, checking the results, and long story short, it took much longer than I had anticipated.

With that said, I really hope the timeline is clear.