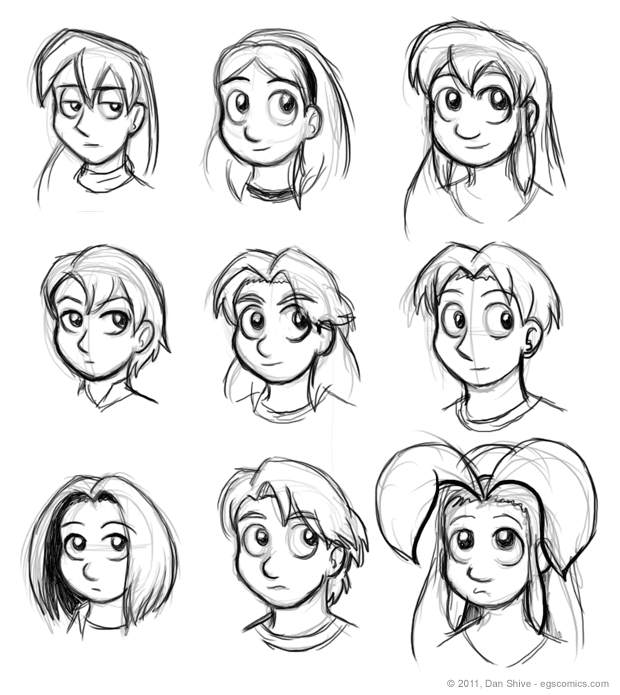 Posted March 31, 2011 at 1:00 am
Darth Justin will be a sketchbook for another day, I assure you, but I wanted to spend some time the past day just sketching the main character heads. Grace is included twice because she winds up looking pretty different with and without the antennae.

A somewhat common criticism of my artwork is that the characters don't have hugely varied facial structures, and there are those who e-mail me saying I need to vary it more for the main cast. These people vary in how polite they are. Some people just kindly say more variety would be an improvement, while others accuse me of being some sort of horrible monster because of it. The latter people can go *this portion of the commentary has been removed by Minion for legal reasons*

While these sketches aren't perfect, they're basically fair representations of their current designs. The differences in facial structure are subtle, but they are there. I assume I see them more clearly then most by simple virtue of knowing what they are and having deliberately tried to draw them, so it's hard for me to tell how clear the differences are to others.

I have actually spent a fair amount of time trying to further vary the main character's designs without betraying the style or making them look like different people, with the latter becoming a problem a lot quicker than the former. I can draw more varied designs in this style. The characters have similar designs, however, going back over nine years. Changing their facial structures in extreme ways isn't something I'm particularly interested in at this point.

Of course, it's debatable whether this is even an issue. Some people e-mail me as though changing their designs is a dire matter of life and death, and that not doing so would be wrong and lazy and some other mean words. Other people hear this and tell me they like the designs as they are and don't see the need for change.

I am interested in feedback on this. Personally, I look at these sketches, and I think I'd mostly like to streamline and finalize the overall on-model rules for these characters rather than radically changing their designs.

Incidentally, if you do e-mail me, the suggestion of further varying noses, ears, eyes, eyebrows, jawlines etc is kind of a given. Those are the building blocks of facial structure. What else would I be varying in regard to their facial structure, their feet?