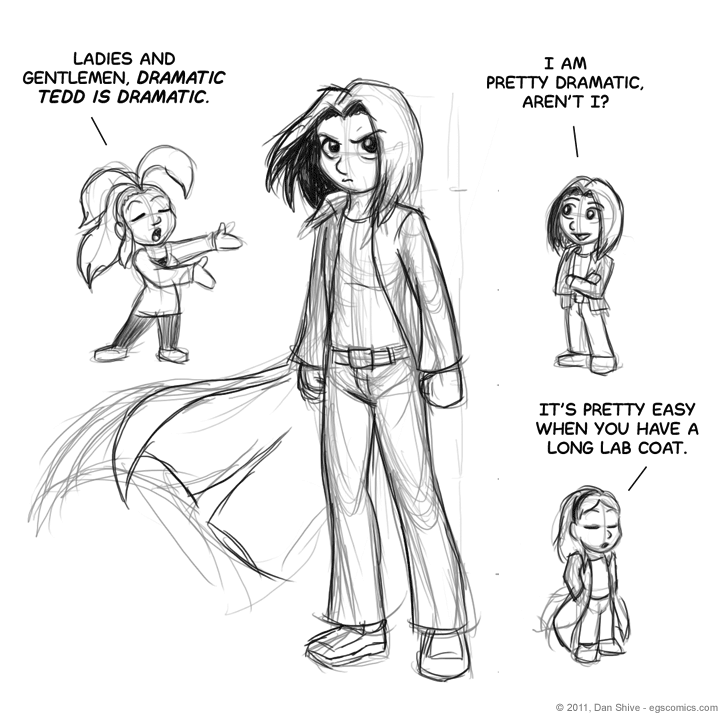 Posted March 29, 2011 at 1:00 am
I started out with the intent of drawing "dramatic Tedd" with no irony to it, but then I was trying to figure out what the heck I was going to do for a sketchbook comic and finally decided to ironisize the heck out of it.

Oh, that's not a word, spellcheck? Well, it SHOULD be. Incidentally, spellcheck, you're apparently not a word, either. Looks like you're ironisized, too.

Anyway, short of thinking of something that amuses me more, the title for the next grouping of storylines after Bringing Silly Back will be 9001% Serious. The title's ironisized, so it won't actually be anywhere near that serious, but there is the distinct possibility in the weather forecast of at least one storyline with dramatic Tedd. Granted, dramatic Tedd might be ironisized as well, but only time will tell.

Why are you still putting squiggly red lines under ironisized, spellcheck? Haven't I used it enough to force it into the English language yet? What about Swedish? No?

Well, anyway, don't think for a second that I've forgotten about Grace's idea for Sarah getting magic help from Tedd...