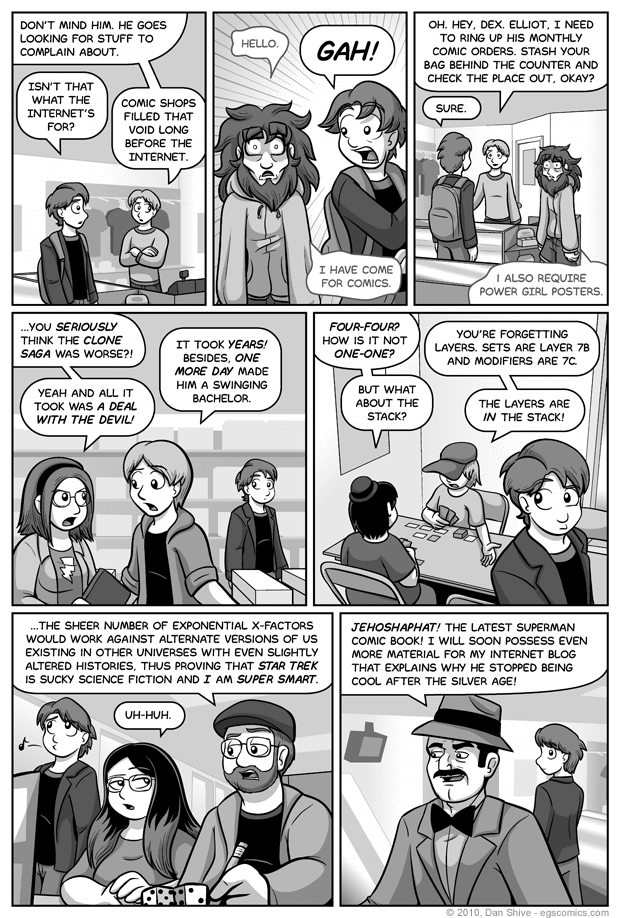 Any similarities to any real people living, dead, and/or the opposite gender are entirely coincidental. Although it's entirely possible that I personally make a cameo. Go on, guess which panel I'm in!

Have you guessed? Okay, now, I know you must have figured that was me in panel seven, but--what? You guessed panel two?

Anyway, I'm the "super smart" guy in panel six. While I don't actually think that I'm super smart or that Star Trek is sucky science fiction, everything else he's saying is something I have been trying to explain to people for years. For whatever reason, it has been a difficult concept to convey.

One of the things I like about this comic is that a lot of it is supposed to go over Elliot's head, so if one doesn't get the references, they're right there with Elliot. For those who would like to get the references and currently don't, however...

Panels 2-3 - This guy isn't intended as a reference to anything in particular. He's just supposed to be a little scary looking. Panel 3 does reference Power Girl, however, who is a particularly well-endowed super hero.

Panel 4 - Both things being referenced are Spider-Man story arcs. One More Day seems to be more controversial and probably deserves to be, but I have a personal connection with the Clone Saga that makes me dislike it more. Put simply, the Clone Saga was starting just as I first tried to get into Spider-Man comics.

Yeah. That was bad timing.

In addition, since I don't read Spider-Man but do enjoy funny rants and comics about Spider-Man, One More Day is actually a boon for me. Seriously, it's inspired so much humor of the variety that I enjoy that if I were to be entirely selfish in my view of it, I would be happy for it. Of course, I'm not, so enjoying the humor that has resulted is something of a guilty pleasure.

Panel 5 - This is in reference to actual rules for the Magic: The Gathering card game. None of that is made up. Creature have states known as power and toughness, which is what the four-four (4/4) and one-one (1/1)refer to. There is an actual scenario in the game where if you cast a spell called Diminish and a spell called Giant Growth, regardless of which was cast first, the creature will become 4/4 due to the layer rules for determining a creature's current power and toughness. There are seven layers, and layer seven has sub-layers. Based on my notes, what Duck (the kid talking about it) says in regard to layers 7B and 7C is accurate.

Panel 6 - The reason this is in reference to Star Trek is multiple instances of parallel universes and the many, many logic errors one can nitpick about them. Nonetheless, I wuv those episodes, and would only make the same claim as my doppelganger here in jest.

Panel 7 - The Silver Age refers to a specific time in comics. This guy looks and is dressed like a generic mobster from Batman and Superman comics of that era, and his dialogue is intentionally overly descriptive to be similar to the style of those comics.

Silver Age Superman is, in my opinion, hilarious. I have a trade paperback of some of those comics, and I can't help but laugh every time I see this one diagram for Superman's anti-radiation lead suit. It's got a TV inside it and everything. I don't know if they intended for it to be hilarious, but by golly, it is.

Also, he could supposedly juggle planets.

This is REALLY behind the scenes and very nerdy, so if that doesn't interest you, you may wish to flee now. It's the last part of the commentary, so you wouldn't be missing anything else.

I have a system for determining how "difficult" a comic is to make. I tweeted about this comic's difficulty rating earlier, but have since revised the system. The difficulty is now equal to how many average comics it is equal to. An average comic has 18 primary components (6 backgrounds, 12 character drawings), and the difficulty is determined by calculating how many of these components are present and dividing by 18 (although I might treat really simple components as 1/2 a component or nothing). In the interest of keeping to a schedule, it's advantageous for me to stick to an average difficulty of 1 or less.

Both the previous comic and this one have 1.3 difficulties, and Monday's was a .83 on account of less than 12 character drawings and some copy/paste abuse. In the end, this week averaged a difficulty of 1.14, which isn't too bad.

As pointless as this might appear, it's an equation that can help me put things in perspective in terms of whether I might want to edit a script, find a way to reuse a background, how much time I'll likely need to finish a comic, etc.

It should also help me look at upcoming scripts and/or outlines and plan out my week, and let me know beyond a shadow of a doubt whether I'm trying to do too much. If I add up the numbers and discover I'm averaging a 1.5, for example, that might be a sign that script revisions are called for, or that I simply will not be doing much else that week.