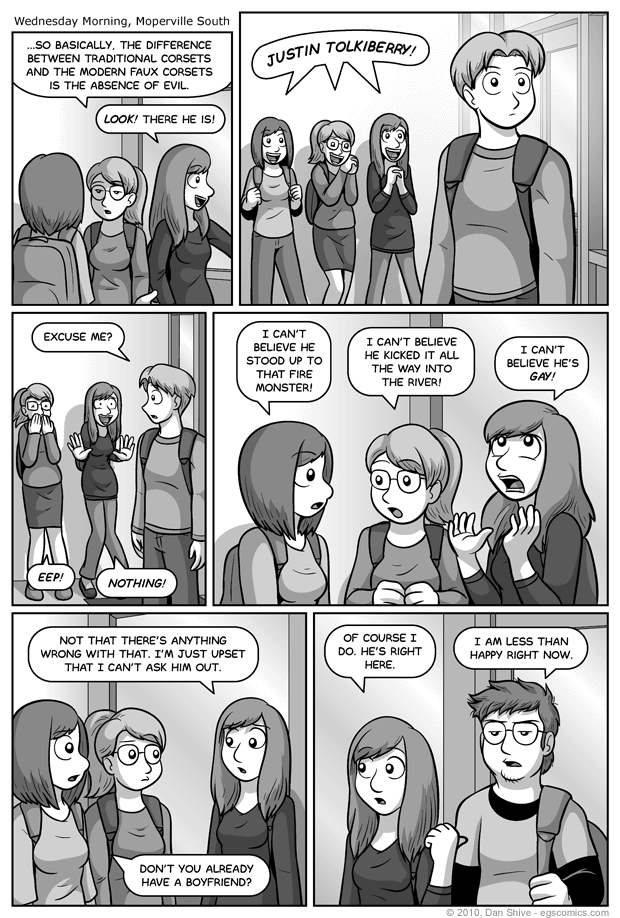 Posted December 20, 2010 at 1:00 am
Is it just me, or have I had to design more and more new side characters and extras lately? And that's not even counting alternate Elliot forms.

This comic reminds me of an earlier one from Sister 2, and I honestly thought I'd have a lot to say about exited teenage girl behavior, but the more I think about it in an effort to comment on how bizarre it is, the less bizarre the behavior seems to me and the more I realize there are plenty of male parallels, so... yeah. I've done out-thunk myself.

So instead, I'm going to focus on corsets. The dialogue in panel one was inspired by a conversation I had with a friend of mine. I had commented on how I thought corsets were evil, and not for a second did I expect my friend to disagree up until the point when she vehemently did.

The reason she countered my statement was because she was familiar with modern "corsets", i.e. tops that are called corsets by the fashion industry, but only look like corsets while having none of the more sinister aspects of corsets (hence the "faux" in today's comic).

I'm an advocate of the evolution of language and meanings changing with common usage, but there are times when I am resistant to change. I see genuine corsets, the traditional ones that squished organs and were capable of causing permanent damage by design, to basically be evil in clothing form. The idea of referring to any other clothing, regardless of a similar outward appearance, just doesn't sit well with me.

Besides which, the modern "corsets" are different enough that I believe it to be a source of unnecessary confusion. It's like how they named the fourth Rambo movie Rambo.

I also think high heels are potentially evil, but I've been told they really aren't if you get them sized right, so I really don't know. On the one hand, I've talked to women who universally hate them, but the women who say you just need the right size are right, the others just aren't wearing the right ones. I can't help but think they'd be impractical, however, particularly after the ten billion jokes that have been made just this past week about super heroes in high heels.