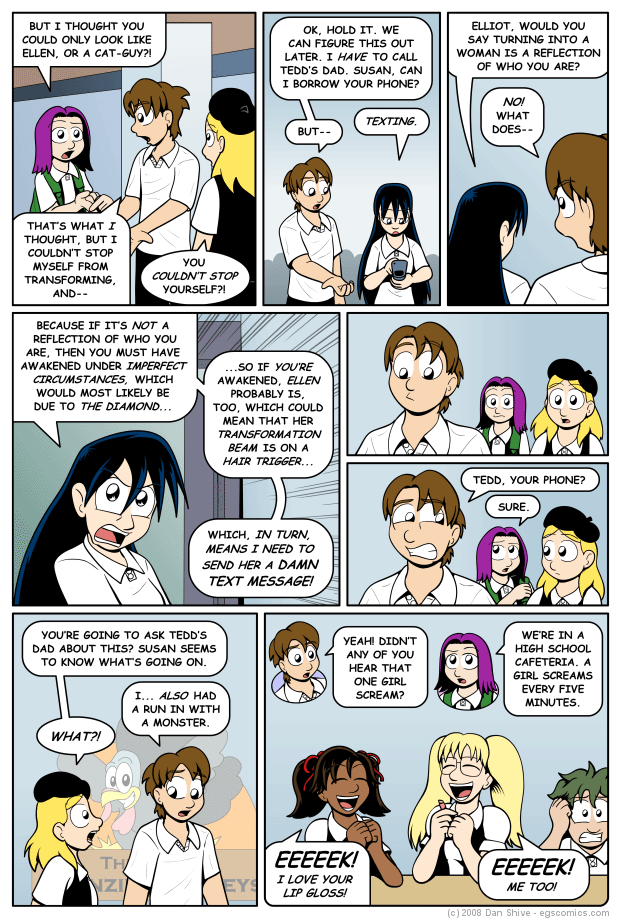 Posted August 19, 2008 at 1:00 am
Those who saw this comic when it first updated may have noticed several different versions of it. Dialogue modifications, panel corner morphs, etc. And to think I was proud of the fact that I finished it early.

Part of the reason for this was that there was some worry over use of the term "awakened" having been used elsewhere, but I've been informed that it's been used so many places that the terminology really shouldn't be a problem. For now, I'm going to proceed under the assumption that it's okay to use.

We've reached the point in the story where technical matters need to be explained, which means dreaded exposition. The strategy this time around is somewhat different and hopefully more entertaining from previous such lengthy explanations in EGS, but I won't get into the specifics of exactly how until we're further into it.

One thing that's bound to come up is the question "why aren't they whispering?" One of the general jokes I have at Moperville North (MNHS) is that they discuss all these strange things without making much or any effort to conceal it, but the worst that ever happens is they get strange looks. This would also be a joke at Moperville South (MSHS), but I prefer to have them whisper when it comes to Nanase being a lesbian to emphasize the importance of it being kept a secret.

This comic introduces possibly the third reason why this Story Arc has the subtitle "awakenings". There are probably more if one wants to try to figure out the rationales, but the ones I'm thinking of are the statue, Elliot waking up as a woman, and now "awakened" to using magic.

And since I suspect some of you are reading this commentary entirely because of the last panel, here's the explanation: a lot of girls seem to scream excitedly as a sign of happiness. I find this odd and sometimes painful, hence that dude with the greenish hairlooking rather distressed.

Okay, okay: Lisa and Amanda are high school students here for no reason other than their screaming during [[2005-05-23|the intro to the party arc]]. How is this logically explained? Well, I would say a time gap between EGS and Germahn Labs, but a comic in Painted Black [[2003-12-31|suggests that Amanda]] was working for Dr. Germahn a few years earlier, so it really doesn't make sense. Note, however, that the bottom corners of that panel rounded, so it can be dismissed as an example by fantasy.