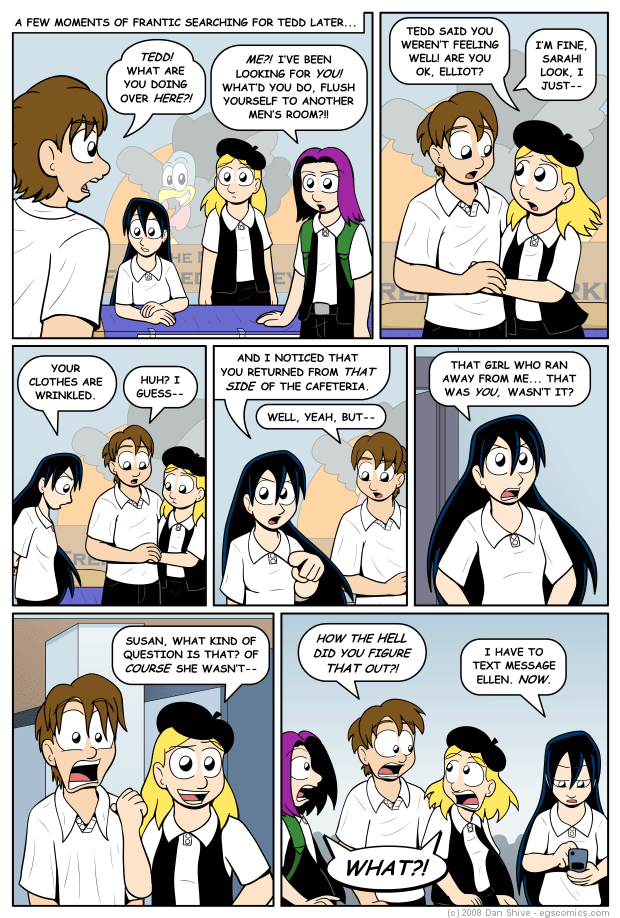 I'm somewhat saddened by the lack of Matt Cohen in this page. I had originally wanted to have a brief three panel sequence with Elliot momentarily postponed from reaching the table by Matt offering him a pamphlet, and as such, this comic would have originally ended with Susan's question in what is now panel five. Unfortunately, as I wrote the scripts beyond this page, I found that the whole thing just had a horrible cascade effect of butchering the timing of future comics, so it was cut.

This comic was relatively easy to draw, as it's mostly just characters I frequently draw standing around talking with simple camera angles. Is it odd that I still refer to them as "camera angels" when there's no camera involved? Anyway, this made it very easy to sketch, but mind numbing to ink. It's already somewhat tedious to go over what one has already drawn, but when the characters aren't moving much, it's even more so. Elliot's face in panel six, however, was definitely fun to both sketch and ink.

Many people both e-mailed me and posted in the forums about how stupid Elliot has been acting by not going right to his friends, and while I defend Elliot's actions from an emotional standpoint, this comic shows just how logically correct everyone was. If you specifically said he should talk to Susan, bravo, though it isn't entirely clear yet why this would be so obvious to Susan. I don't want to say too much, but there's a big, huge fat clue as to why towards the end of the first Sister story arc.

Also, Sarah rubbed Elliot's tummy. That's why her hand is where it is. I just felt obligated to point that out.