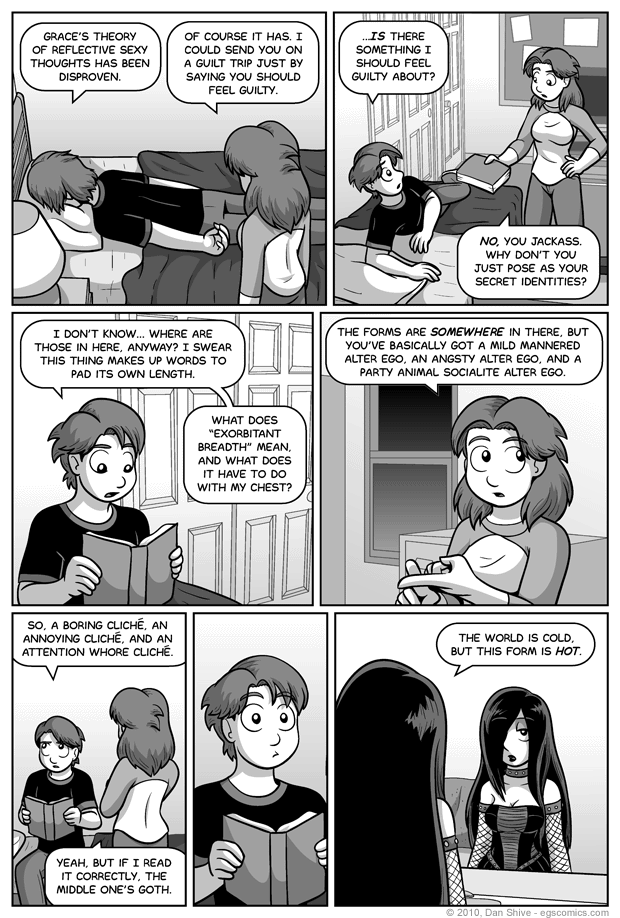 Posted December 15, 2010 at 1:00 am
I spent some time trying to figure out where the spell book would be so Elliot could conveniently have it in panel three, but it was easiest to just have Ellen hand it to him. I guess Elliot never got it back from her?

The exorbitant breadth of the spell descriptions in the spell books has been touched on in previous comics (well, at least one). Part of it is a handy-dandy excuse for how they can misinterpret, or not even be aware of, some of their spells. Another is for exorbitantly stupid jokes like the one in panel three.

That said, I am unlikely to ever show the actual interiors of the these spell books. Much like horror movie monsters and naked cartoon characters, it's always way better when left to people's imaginations.

Incidentally, remember the AF04 universe from EGS:NP? The alternate universe where Sarah isn't with Elliot, but has gone all "gothy"? It only took six years, but yay for additional subtext regarding why Sarah might've gone goth?

Frankly, I use the term fairly loosely because the vast majority of people I know use it loosely (except for one person who I never use the word around ever seriously it's just not worth it). To the point, however, Elliot and Ellen would use it loosely in any case because they simply wouldn't know better.

Of course, I've often been surprised by which of my characters have been described as being Goth. Liz wasn't much of a surprise; her design (and bad smoking habit) were inspired by a friend of mine who was a self-described goth, after all.

The biggest surprise, however, was Susan. That was never my intent with her, and I think she was described as such by at least one person as early as Night Out. Does Susan qualify? I can sorta see how one might think of her that way now, but part of me just doesn't accept it given her lack of makeup and her lack of black clothing... although Susan being described as "goth" was probably more about attitude than looks, but as I said, it's always confused me.