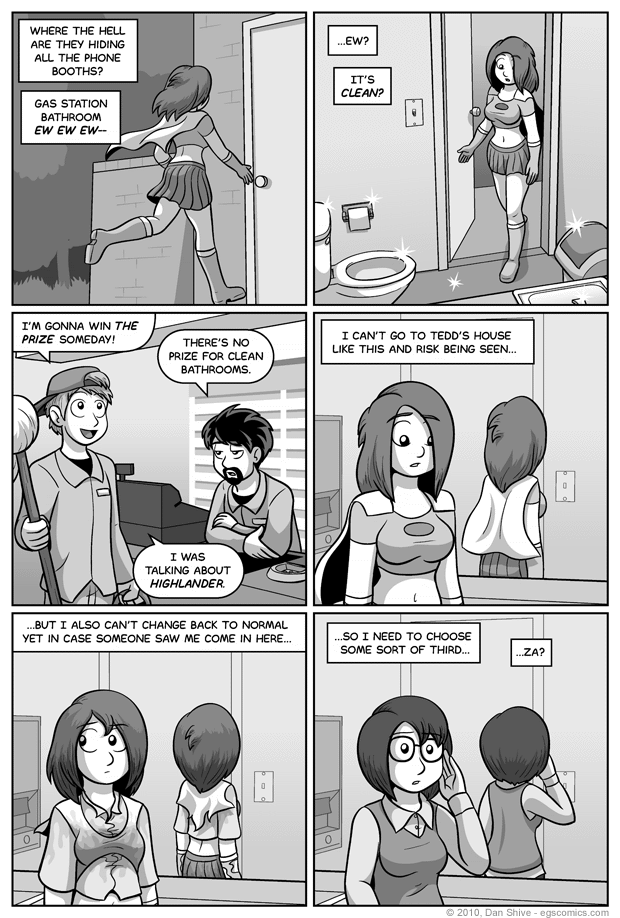 Posted October 20, 2010 at 1:00 am
For those of you not familiar with Highlander, "the prize" is awarded to the last surviving immortal who has, presumably, earned said prize by virtue of chopping off the head of the other last remaining immortal, so... yeah. Let's hope he's joking.

Incidentally, any resemblance between these clerks and some other Clerks is entirely coincidental, I assure you. Nonetheless, I'm betting at least one of them wasn't even supposed to be there today.

If you wondered whether you missed a panel upon reading Elliot's narration about Tedd's house, you haven't. This is the first mention of Elliot planning to go there, so it's apparently something he's decided on his own for some reason.

I don't consider it unusual, or even irrational, to be apprehensive about having to use a gas station bathroom. While I'm sure there are gas stations out there that take pride in their clean bathrooms, there are others that are nightmarish and anyone who has been on road trips has likely been witness to at least one such disgusting bathroom.

What probably is unusual, and very irrational, is to be a cartoonist whose script writing progress is delayed as a direct result of being so troubled by the idea of one of his characters having to be in such a location that they desperately try to figure out a different location and only finally allow the scene to take place in the gas station bathroom once a joke is devised about the bathroom being perfectly clean.