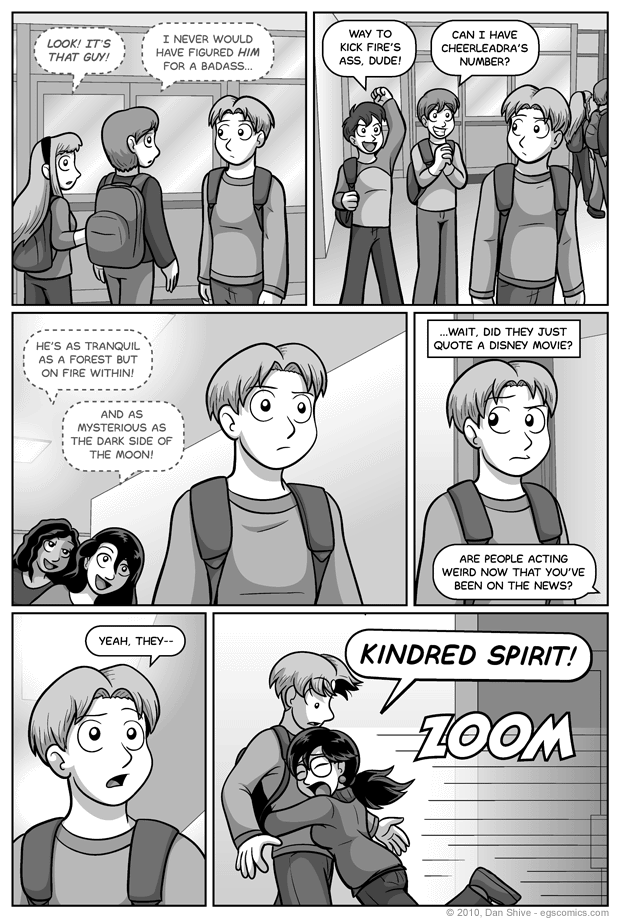 Posted December 22, 2010 at 1:00 am
Before I get to what is sure to be the best commentary every, this is the cliffhanger for this week as Friday's comic will be a holiday sketchbook! (Pretend to be happy about it as this is partly being done to save my sanity)

You know, I think I've drawn Justin walking through a hallway in a similar fashion sometime before...Oh. Right.

Well, anyway, The Disney Movie Justin refers to is Mulan. For whatever reason, I found being less specific in the comic more amusing. It's possible that Disney is just a funnier word than Mulan, or that something is broken in my brain. I bet it's both!

Truth be told, I've never actually seen Mulan (or Tron, Labyrinth, 2001 A Space Odyssey, Planet of the Apes, I could go on), but I plan to rectify that situation after being exposed to one of the songs from the movie titled I'll Make a Man Out of You, which is where those lines in panel three are from. I'm hoping the movie's good, now that I've referenced it in the comic and what-not. In any case, it has at least one song I like.

One can probably guess who that is in the last panel, and I don't consider it a big mystery, but all the same, I'm not going to say her name until the next story comic. She's been in at least one comic, however.

I mentioned in the previous comic's commentary that the recent explosion of extras was out of control, and the madness continues with this comic. It honestly gets a bit frustrating come up with all these one-shot designs, so odds are good they'll wind up showing up again.

Oh, and I also mentioned corsets. People came to their defense. A sketchbook resulted. To clarify even beyond the sketchbook entry, I've been told the "S curve" corset is what I hate with all my hatredly hatredness of hate.