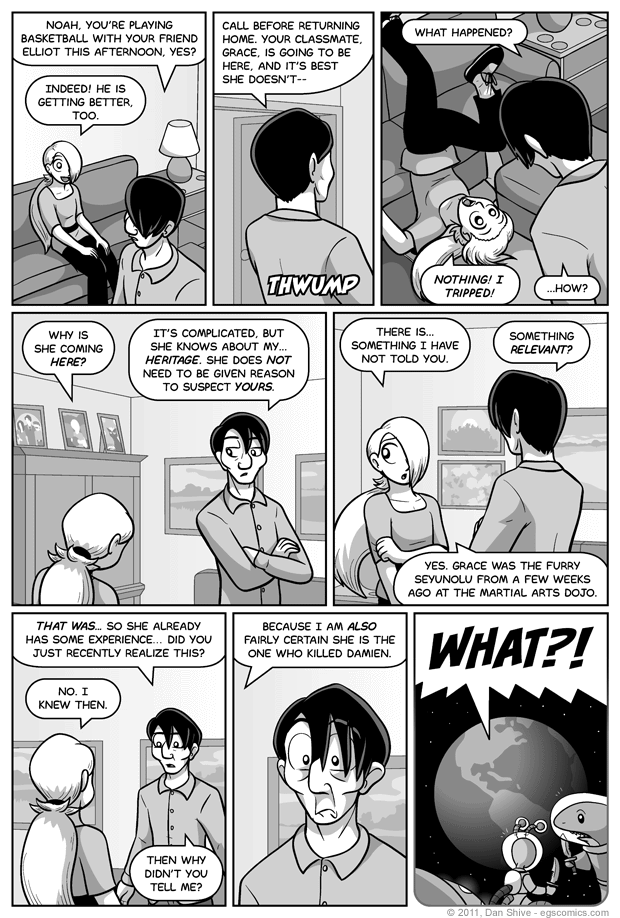 Posted December 9, 2011 at 1:00 am
- When last these two shared a scene...
- Well, kinda-sorta killed Damien
- Previous exclamation heard from outer space
- "I can't shake the feeling he's going easy on me."
- Suspicions of Damien slaying
- "I tripped!"

I very deliberately limited how much information Noah shared with Raven about Grace back towards the end of New And Old Flames. Granted, that would have been the way to go even I wanted to save this moment until now as it would have been an entirely unnecessary recap, but STILL! Oh so sneaky. Yes.

I originally intended for Noah to be tying his shoes in the first panel of this comic, resulting in him leaning in such a fashion that could lead in to his falling off the sofa. As I looked at references for poses of tying one's shoes while sitting on a chair or sofa, however, it became evident that Noah's face would wind up being obscured, and I'd have to be very careful drawing it to make certain it was at all clear what he was doing.

As such, panel three wound up making just that much less sense. That's probably for the best.