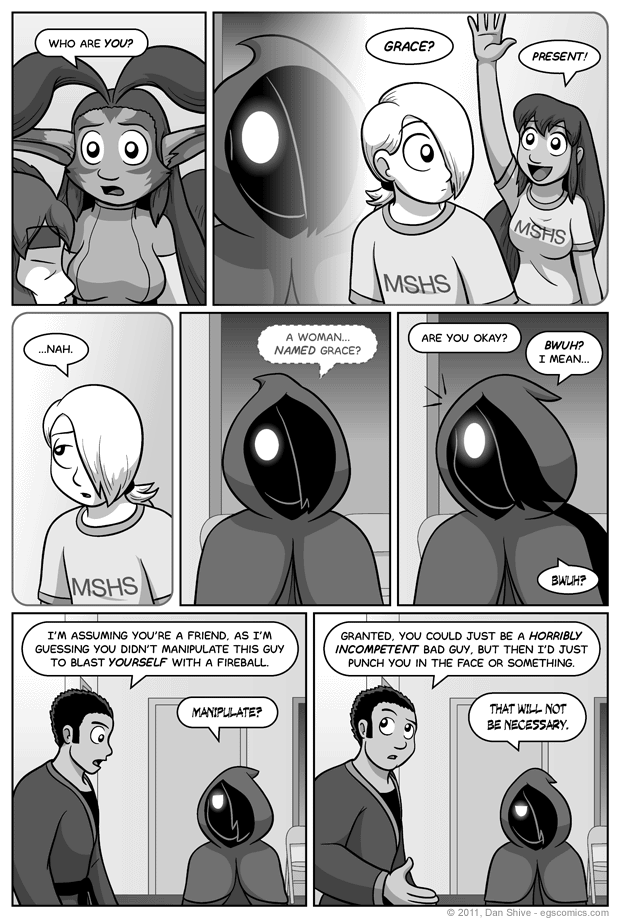 The odds of the Noah - Child Left Behind connection being a red herring are rapidly diminishing, but that doesn't mean you should give up hope, fish fans! Although, I don't know if fish fans are big on red herrings... do they like all fish, or just some fish? It probably varies.

I've been resisting the urge to make a Christian Bale Batman voice joke since the first comic with Noah's shadow form. I almost had Justin make a crack about it earlier, but it just seemed forced and Justin had just chastised Melissa for a similar comment. In the end, though, I think everyone who would get it was likely to be thinking it anyway.

I was going to link to one of the Batman movie trailers on YouTube with Christian Bale doing the voice just for reference, but the gravelly Batman voice seems conspicuously absent from the trailers I found. It's enough to make me suspect that someone in marketing thought it was silly. In any case, Bale's Batman disguises his voice by making it sound gravelly.

And before anybody tells me "but everybody knows that", you're talking to someone who has yet to see the original Tron, the 1980's Transformers movie, and a whole mess of other stuff. I know what it's like to be the guy who doesn't know about the pop culture thing everybody else is talking about. It tastes like bad fish.