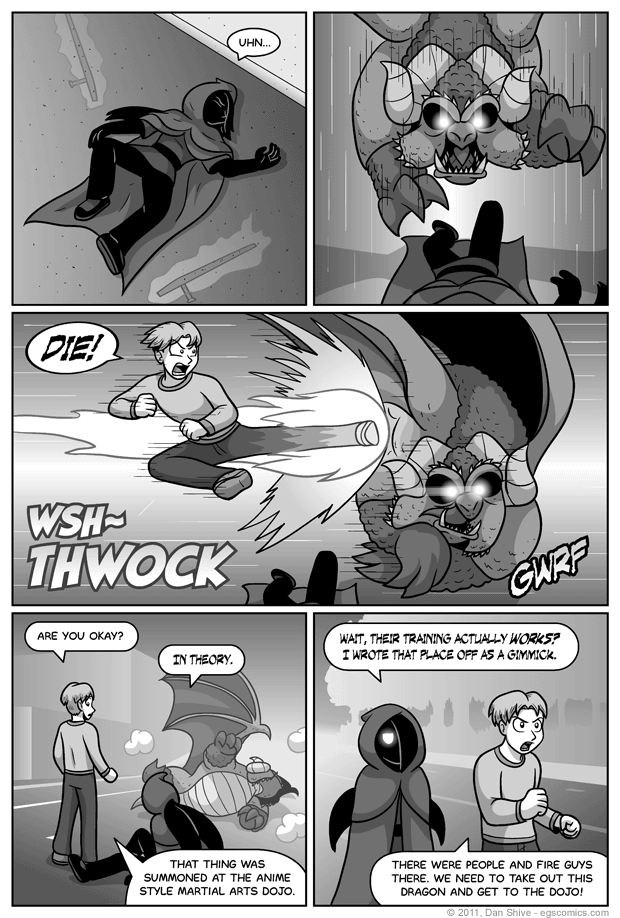 I tried to think of various complex taunts Justin could use in this comic, looking up words like "draconian" to see if it could legitimately be used in reference to this dragon (it couldn't) and what-not. As you can see, however, I settled on the sort of dialogue you'd find in a Castlevania game.

I got a lot of responses to the previous comic claiming that the way Noah was previously holding the tonfas was okay, though I remain confused. The way I imagine properly holding the tonfa, and what I've seen demonstrated, is the wrist not really turned from it's neutral position, meaning the tonfa would be below the arm as opposed to side-by-side with it. This allows swinging of the tonfa from side to side, jabbing with the tonfa, and blocking with the tonfa. I can picture the other way for vertical swings, but I don't picture jabbing or blocking with the tonfas held that way being as strong, and I also don't think the swings would hit as hard.

That's all just conjecture on my part, however. A few of the people who e-mailed me claimed to use tonfas, and I don't doubt they know more than I do, and I've only seen basic demonstrations of tonfas and moves done in fictional sources (in other words, I've seen the basics and what could well be pure fiction). If anyone can recommend more advanced demonstration videos on Youtube or something, I'd be sure to check them out.