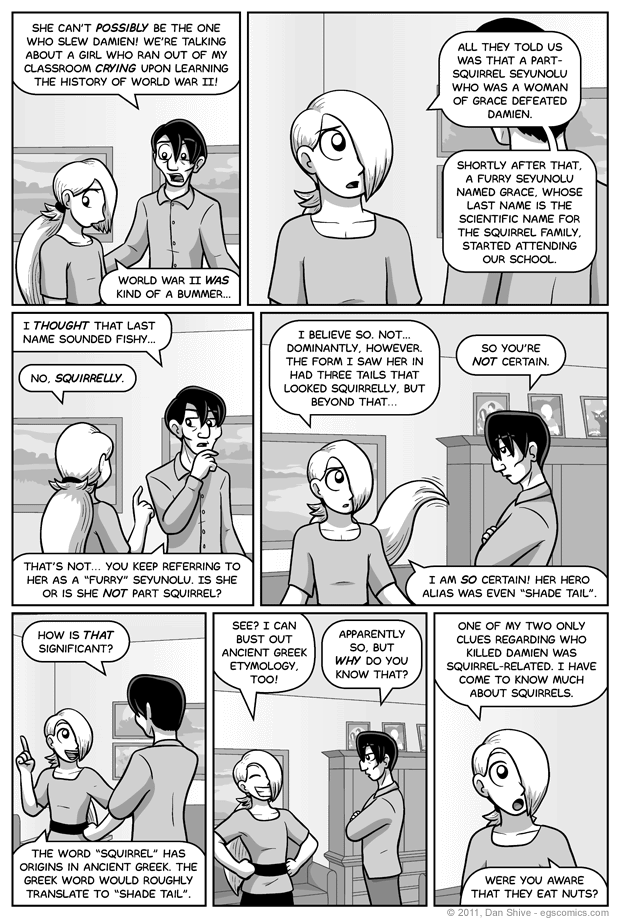 Posted December 12, 2011 at 1:00 am
- Part squirrel and a woman of Grace
- Ran out of the classroom crying
- Noah first seeing "furry" Grace
- Ancient Greek etymology

This isn't the first time Noah's failed to comprehend what is and isn't common knowledge, and it's doubtful to be his last. Could be, though. Only horoscopes know for certain what the future holds.

The original version of the previous comic simply had blank gradients within the picture frames in the background. I decided while making this comic that I would much prefer they have visible content in them, so I went back and added pictures within the frames.

I personally believe it to be a vast improvement. If you disagree, feel free to take it up with the knife-fighting space shark.

When Noah first tripped in response to Grace saying "Shade Tail", the most common question I received was "why would Noah react to that?" The simple answer is given in this comic: "Shade Tail" is indicative of squirrels to anyone who knows the origin of the word "squirrel", and given that he had so little else to go on, Noah had taken it upon himself to learn a lot about squirrels.

With that in mind, I think it actually would have been a bit odd had he no response to "Shade Tail" when he was already suspicious. Of course, I don't think the average reader of this comic, or anything, really, would have the origin of the word "squirrel" in mind. It's a bit less common knowledge than the whole "they eat nuts" dealie.