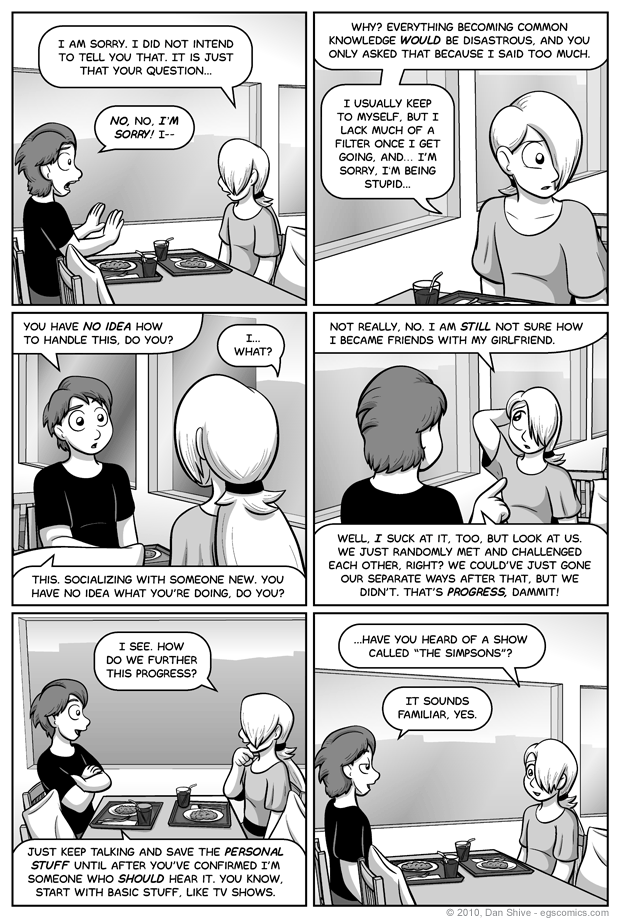 One thing that has been said to me is that people don't meet and become friendly this way, which seems odd to me. I've met people and made friends under many different and unexpected circumstances, often with competition and initial resentment involved. I know that doesn't always happen and probably usually doesn't, but the point is, it can and does happen.

I would be more willing to agree if one of them had won and acquired the stand (hence why neither did), but given that neither of them got it and the food court is part of the store they were already in and it was between eleven and noon, aka lunchtime? I find them having lunch together among the absolute least strange things about this storyline.

Oh, and I claimed on Twitter to have work left to do on this comic before posting it and that "Make out scenes are difficult to shade", so don't feel too bad if I indirectly called you evil earlier as I am clearly far more evil if all you're guilty of is not wanting to hug a comic character you barely know anything about ;)

Actually, I would blame it on April Fools, but it's the sort of teasing joke I'd make any other day of the year, so that would be somewhat disingenuous. That, and I already did my April Fools bit in Thursday's sketchbook commentary. It was admittedly not much of a "prank", but it could've been worse.