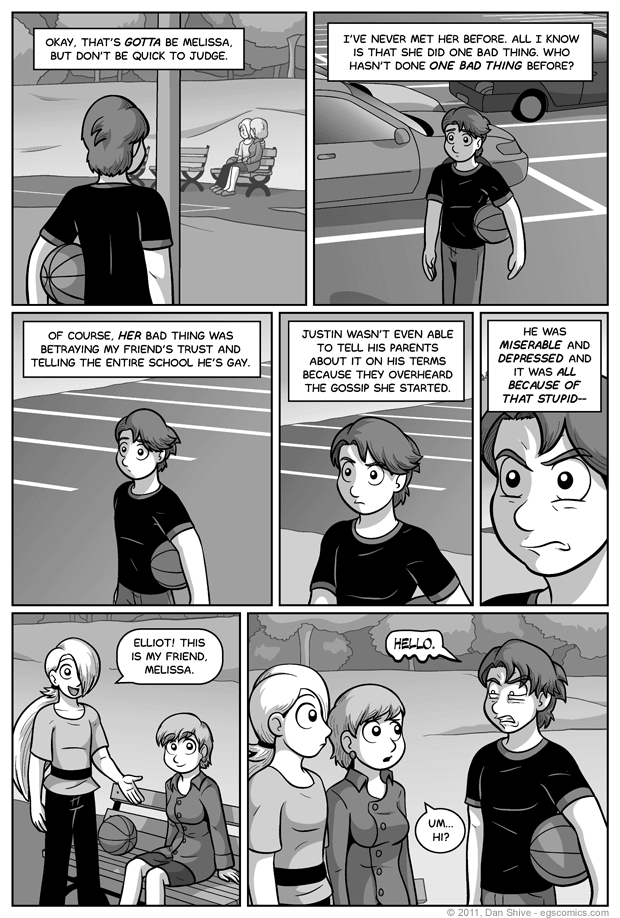 I tend to like it when Elliot gets angry. Even if it's not the appropriate response, I can usually identify with the source of his rage.

I rarely get as mad as he does unless I'm hungry, however. I have patience that has stunned people when well fed, but once I'm hungry enough, I'm humorless and impatient. When I snack, it's to the benefit of everyone around me.

Whereas the previous comic said "screw narration!", this comic obviously called for it. What I find interesting, however, is that this "narration" would have been in the form of thought bubbles in earlier comics. Back at the start of the Indiana Elliot storyline, I thought I was being clever by providing Elliot with a first person narration via those text boxes, but it seems like that narration boxes instead of thought bubbles has become an industry trend in comic books.

I'm sure someone somewhere is looking at this comic and claiming boldly to any who will listen that it's an unnecessary recap. The fact that Melissa betrayed Justin has been brought up twice now in this storyline, and details were given during the party arc.

This comic functioning as a bit of a recap, however, is more a side effect than the main point. This has less to do with recappery and more to do with Elliot's state of mind and how much he personally knows about Melissa and the situation.

If it's fun to claim this is a recap comic, however, don't let me stop you. In fact, I'll help! This comic now has my official RECAP SEAL OF APPROVAL! This seal is valid everywhere on Earth except Arizona. I don't know why it's not valid there, but it's beyond my control. My apologies if that inconveniences anyone.