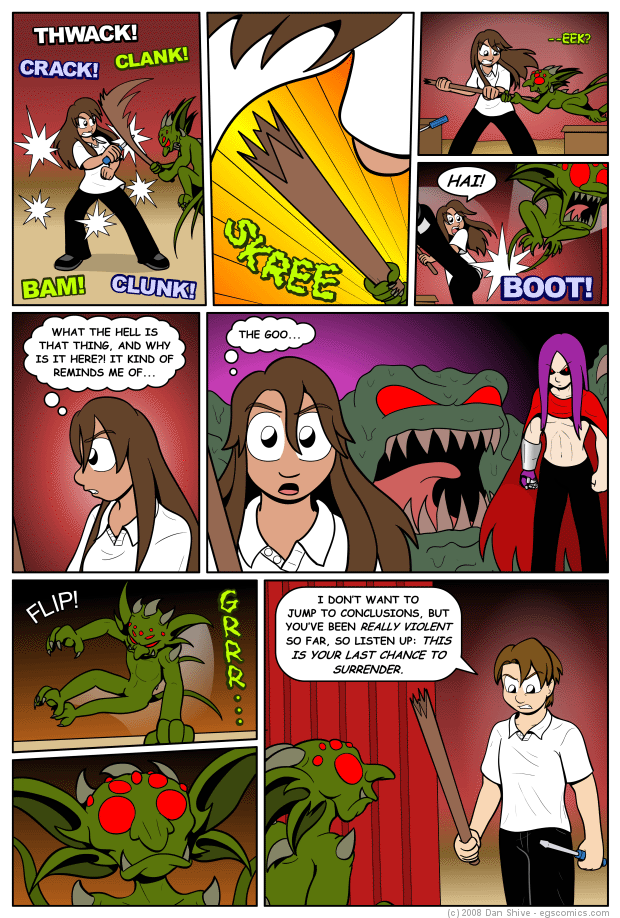 When I first designed the Bloodgrem, I was worried about it resembling the Goo. I tried different color schemes to differentiate it and considered changing its design, all because I didn't want to bring up Lord Tedd. Lord Tedd is not a part of this story, nor are any of the denizens of his dimension, and I wanted to leave him out of it.

I realized, however, that there was no avoiding bringing him up. Even if I made the Bloodgrem look like a pink hamster with wings, Lord Tedd would still come up. Elliot has no idea why there is a violent monster in the school, and the only real reason he would naturally think of would be that it's another of Lord Tedd's monsters. There's really no other conclusion for him to jump to at this point, regardless of his claim about not wanting to jump to them.

While I originally saw this as a bad thing, I now see it as an opportunity to briefly address certain matters regarding Lord Tedd, and to add to a small running gag that will be coming up later regarding how unnecessarily complicated this story could get and how it must be avoided. Additionally, this makes this story arc parallel the first [[2002-05-26|Sister]] even more now. Goo, Lord Tedd, jumping to conclusions... it feels more like a sequel to me now than it would without bringing those things up.

While much of EGS combat has no real basis on actual martial arts, the first few panels of this comic does. I used to study [[wp:Hapkido]], and while I did not get far enough along in it to deal with weaponry, I witnessed many demonstrations of one person using a short stick to defend against a much larger one.

The disarming move used in panel three is accurate to a point, as the actual disarming move would have Elliot pushing back against his opponent. I wanted to put some distance between Elliot and the Bloodgrem, so I had him kick the monster instead. I was taught that Hapkido is generally about ending the fight without anybody, including the aggressor, really getting hurt. This modified version is somewhat contrary to the philosophy of Hapkido, but that remains the inspiration for the move. It's also why Elliot wound up with a screwdriver, as a relatively large, strong steel screwdriver would function as an adequate analog for a small, thick stick.

I have the feeling the modified version of the actual move wouldn't work nearly as well in real life. Then again, most people would be grabbing the weapon from a grounded human sized adversary and not a midair monster monkey, so who knows.