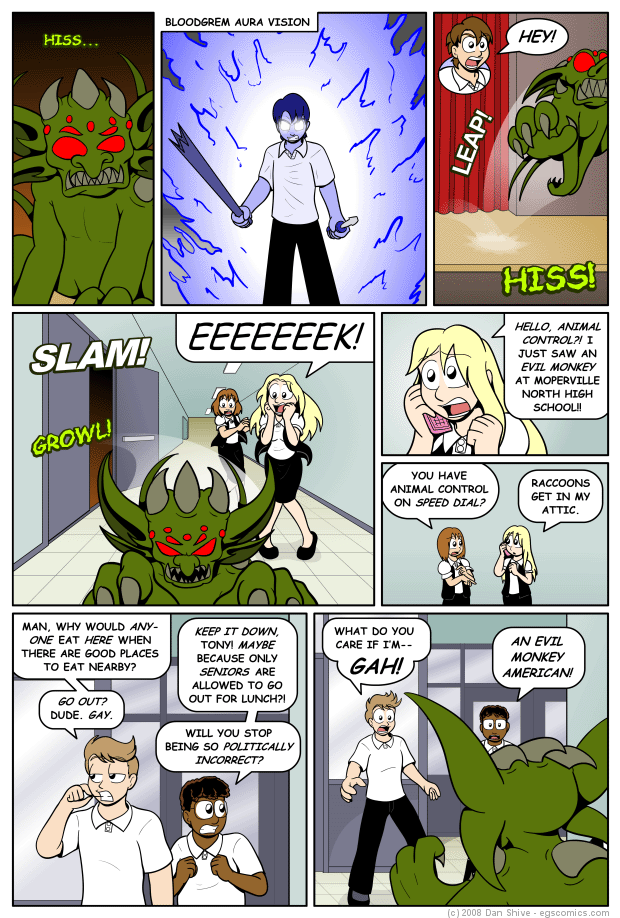 Posted August 4, 2008 at 1:00 am
Ah, Aura vision... it's fun to imagine different ways to see the world. Also scary. Imagine if someone was really mad at you, prepared to utterly destroy you, and you could literally see it. Granted, that would be a good way to alert you to run and could save your life, but it would still be scary.

The girl on the cell phone has been in the comic before, back during the first Sister. She first screamed [[2002-10-12|because of the Omega Goo]], and later [[2003-01-03|complained about it being cold outside]]. Her official role in the comic is "screaming blonde girl", specifically blonde because of horror movies (they started it, not me!). She may or may not have a counterpart at South, but if there's a monster sighting at North, I believe she should get her scream on.

Of course, even if she doesn't show up during future monster events, she had to show up this time. Remember, everyone, this is a sequel! Sequel-like... stuff has to happen!

Speaking of returning characters, there's Tony and his friend. Have I still not named that guy? His role is to have to deal with Tony and apologize for him all the time; he deserves a name AND a medal! As for why he's so concerned with political correctness, there are two reasons.

First, the meta reason: I like to make jokes about trying too hard to be politically correct. The character reason: he's friends with Tony, and feels like he has to make an extra effort to maintain his own political correctness because of it. He also feels the need to apologize for Tony.

Based on the character reasons, I am working under the assumption that these two have been friends for a long time. I doubt they would have met in high school and became friends then, but if they've known each other for years and years? Two people can grow apart in many, many ways while still remaining friends while attending school. I know this from personal experience.