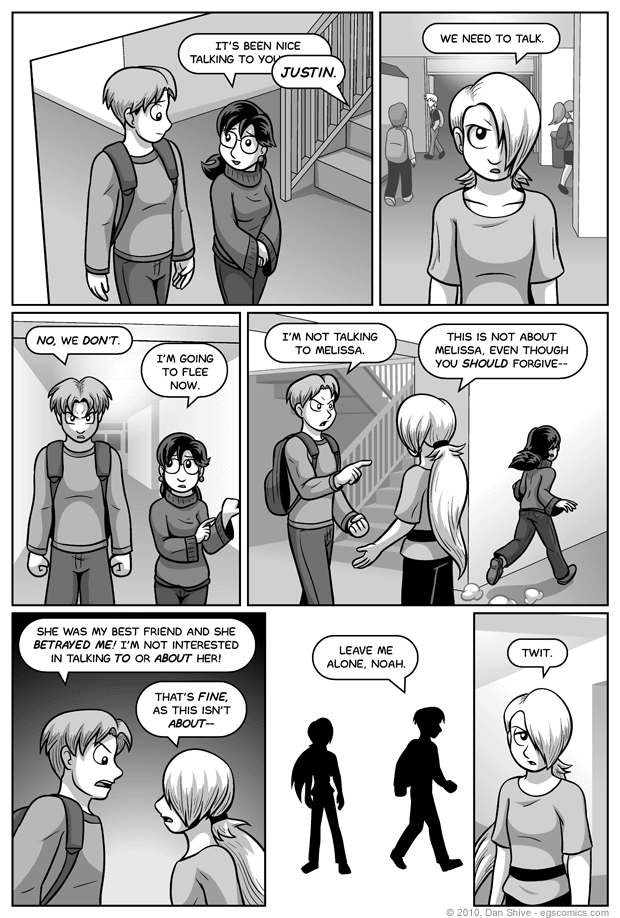 And thusly, after lots of e-mails, tweets, and requests from various random other places, Justin and Noah FINALLY have a scene together! And they apparently can't stand each other. I honestly don't know if this will encourage or discourage the shippers.

I'm not exactly tight-lipped about the existence of retcons in EGS, and one I'll most freely admit to is the retconning of Melissa's relationship with Noah. When she was first introduced, she and Justin had simply gone out on one date and she'd become obsessed. I didn't have a more complicated back story in mind.

I also had some REALLY weird stuff in the comic back then. I blame my mind being warped by anime. Yup. I'm entirely blaming Nanase's stupid illusion dealie on a generalization of an entire country's animation. Not my fault AT ALL.

Gradually, as often happens with me, Melissa's character and back story evolved, as did Justin's. It was hinted at in one of the few canon EGS:NP storylines (which also very briefly introduced Noah), and elaborated upon during Grace's Birthday Party.

As for Noah continuity notes, I basically just recommend re-reading Indiana Elliot And The Temple of Swedish Furniture along with this comic. He's had several appearances before then, including several sketchbook entries, but it wasn't until the start of Bringing Silly Back that he really DID anything.