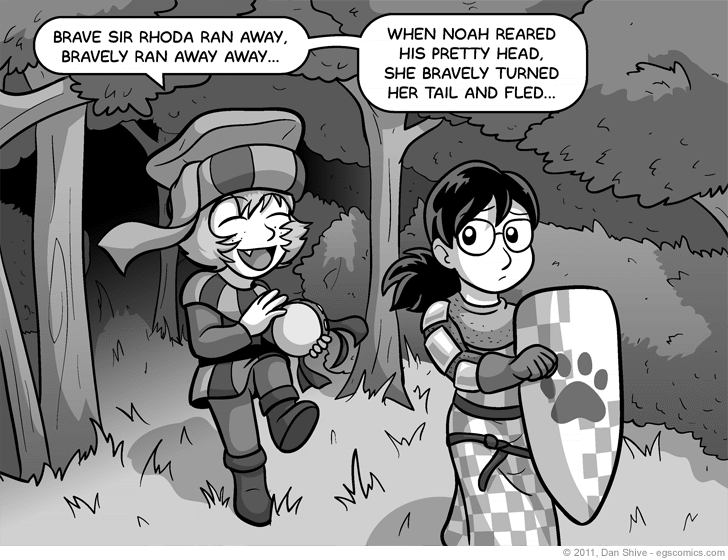 Posted January 4, 2011 at 1:00 am
Clearly inspired by this story comic, the one that follows it, and Citizen Kane, this comic...

...what? Oh. I meant Monty Python And The Holy Grail, not Citizen Kane. I'm always getting those two confused.

As far as has been established, Catalina and Rhoda have never met in canon, but I do think of them as being connected in a strange way. Catalina is the spirited cat of Moperville North, and Rhoda is the timid puppy of Moperville South. That, and Catalina seemed perfect for the role of a bothersome minstrel. I have no idea why.

I first saw Monty Python And The Holy Grail at an age too young to fully understand all of the humor (the tale of Sir Galahad comes to mind), but as with many minds, the movie is basically ingrained into my psyche. I haven't exactly kept detailed records, but I'm fairly certain I have quoted the minstrels of Sir Robin more than anyone else in the film with the possible exception of the knights who say ni.

That said, there is definitely a very strong nostalgia component to my liking the movie, but I believe it to be a film I enjoy for reasons beyond that. It is quite hilarious, and if you haven't seen it, I would recommend giving it a shot. At the very least, you'll finally know what the hell all that ni and shrubbery nonsense was about.

Incidentally, the "horse riding" movements they do in the movie? Surprisingly fast way to move. If any of you came after me, I'd get on my imaginary horse and gallop away, and you wouldn't be able to catch me. You'd think you'd be able to, I'm sure, but there's just no chance short of having mastered the art yourself. Unless I see coconuts, I'm not going to worry.