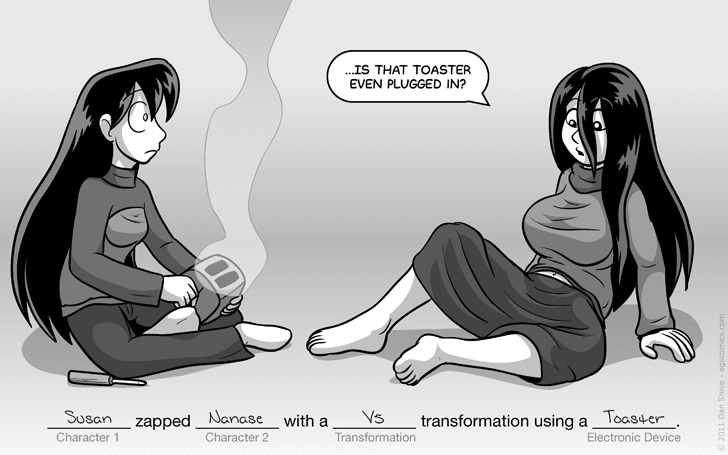 Posted January 6, 2011 at 1:00 am
Okay, if I was clairvoyant, I totally would have done a different sketchbook comic last Thursday. I also would have bought the Fallout 3 Game of The Year edition right off the bat instead of buying the cheapo version on sale first "just in case it sucks". I think it's safe to say it doesn't.

Okay, here's the full story. Once again, I used the Twitters as a way for people's votes to affect sketchbook content. Last time,I asked for people to vote for a pairing. This time, I got all mad libby. I eventually phrased the question thusly:

"I have four blanks in a sentence to fill. Character 1, Character 2, a transformation, and an electronic device. Vote for each blank."

I say "eventually" because I had to restart the voting and clarify some things after people were voting for things that no one else would vote for. For example, there aren't likely to be repeat votes for a "winged purple kitty with bobcat ears" transformation, but six people voted for "half-cat". The less obscure / specific, the better the odds.

Susan was the winner by a long-shot for the Character 1 blank with 20 votes, 11 votes ahead of the runner-up, Elliot. She also did respectively well in the Character 2 slot with 7 votes. I'm not sure what I would have done if she won both blanks... alternate universe Susan?

Nanase won the Character 2 blank by 1 vote with a total of 9. Catalina was the runner up with 8, and I was honestly hoping Catalina would win given the lead V5 had in the transformation blank. Nanase getting zapped with V5 is, in my opinion, a bit much. I know some people will lynch me for this, but I had originally sketched Nanase in her outfit from this comic, but decided to cover her up more. It was, as I've said, a bit much.

V5 (Female Variant #5) won the transformation blank with 15 votes, the closest thing to competition being 7 votes for shrinking. I would say bigger is better, but growing only got 4 votes.

And finally... Toaster. Toaster won the electronic device slot with 11 votes, beating out video game consoles by 3. I was all ready to draw someone flailing a Wiimote when I checked the spreadsheet and witnessed the dominance of the toaster.

Okay, I'm both thrilled and baffled that a damn toaster won this thing. The very fact that it won validates the "fill in the blank" voting fun, even if it can get a bit confusing. I would NEVER have thought to put "toaster" on a pre-written ballot.

Was this organized? Is there a forum thread somewhere with a rallying cry for toasters? Did people do a search and decide to vote for toasters after they saw other people doing it? Are toasters just that universally adored? Seriously, how did a toaster win this thing?

One of the goals for this was to take the results and draw something with the chosen characters, device and transformation while keeping everyone in character. As one might imagine, keeping this sentence in character presented a bit of a challenge.

In the end, I went with the old cliche of disastrous things happening when one tries to fix a toaster and made the whole thing an accident. It was the only way to make all of this make perfect sense.