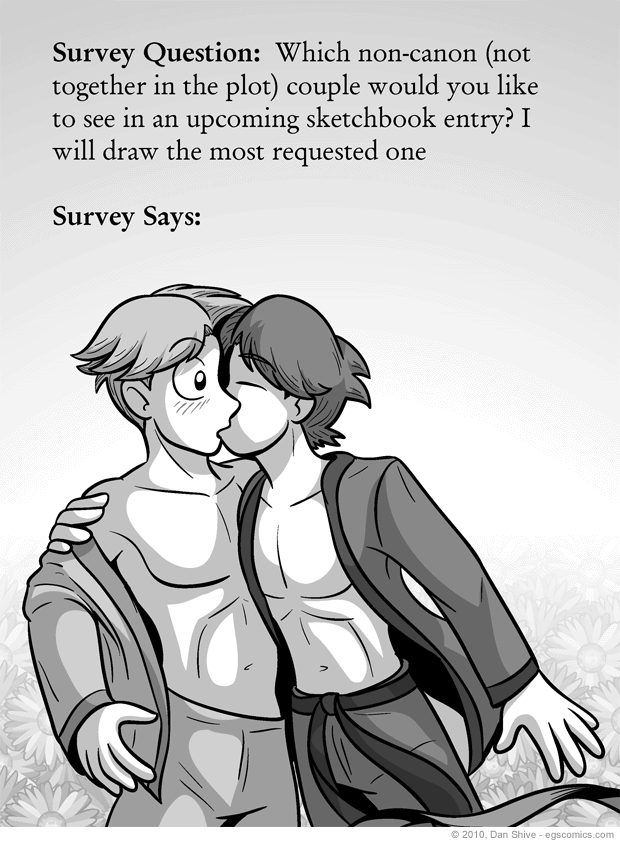 Posted December 14, 2010 at 1:00 am
As mentioned in the previous sketchbook comic's commentary, I decided to do a survey to determine what non-canon couple would appear in this sketchbook comic. Justin and Elliot won with 13 votes, and that's not counting votes that put them together as a different combination of genders.

Not counting different form variation requests, the runner up with 5 votes was Grace with Sarah. Counting form variations, I think Justin and Susan were the runner ups with 6. Regardless of whether form variations counted separately or not, Justin and Elliot won by a long shot with 13 or 18 votes respectively (3 of the extra 5 being in favor of Mild Mannered Elliot with Justin). Another popular option was Susan and Catalina with 4 votes.

They're not listed in the order I received them, but rather as close as I could get to alphabetizing the results. For example, I roughly sorted "you should draw Justin with Elliot" as though it were "EJ", "Susan should totally be with Justin" as "JS", etc. If I ever do another survey like this, I'm going to have a rule of having each tweet / e-mail start with the couple's first names in alphabetical order because sorting out the results for this was nightmarish.

That said, some of these MIGHT be "out of order", but Justin with Elliot won by such a huge margin that I'm not really going to cry if I was off by one vote somewhere (at least not until the candidates' lawyers show up).

SO many choices... -evil laughter- Oh, I can't pick... Well, just to be boring... Amanda and Lisa. Technically it isn't canon.

Catalina and Rhoda! Cats and puppy dogs and madness and all that!

Ever since that couple of strips back in May of '08, I've wondered how Susan & Catalina would work out. That'd be cool to see.

Catalina and Susan, of course :)

Here's an interesting pairing: Damien and Shade (as in sexy-evil Grace)!

Jeremy and the evil, distracting duck as a couple. It's been forever since we saw the evil duck!

Susan in V5 form and Ellen.

In regards to the survey I cast my vote against Sue/Justin and vote wholeheartedly for Tedd x Ellen. Gotta with the awkward.

Elliot and Justin! Give us some boy/boy lovins!

How about we make a character happy, and go with Justin/Elliot?

Justin and a regular, willing Elliot.

Elliot and Justin... now I need to make a few hundred fake twitter accounts so this one wins

Justin (Male) and Elliot (Male). If you're not comfortable with that pairing, perhaps both female?

Hrm. Elliot and Justin, for starters. Throw a bone to the poor shippers.

Most definitely Elliot and Justin. Give the poor guy some part of his desire.

Elliot and Justin! I suppose Justin likes Elliot, but technically they're not together... or I just don't pay attention ><

JUSTIN AND ELLIOT. Because I'm evil.

I don't have Twitter, but I'd like to cast my vote for Tuesday's sketchbook to feature Justin and Elliot ... preferably both male.

I'd like to see Justin and Elliot as a couple; poor Justin deserves a little happiness! :-)

This is my first time on twitter so i'm probably doing this wrong ^_^0 but... uh, can we get a JustinXKentElliot?

Disguise-Elliot (girl) and Justin would be an interesting twist.

I'd like to see more of Tess, Tess and Justin maybe? Or maybe Justin and Mild Mannered Female Elliot? Both would be good.

Justine and Mild!Elliot. The awkward would rip a hole in timespace.

Mild-Mannered Elliot and Noah FTW! (Or any female-Elliot for that matter.)

Noah and Mild-Mannered Elliot. I can't help it, it's somehow very cute.

Disguise Elliot and V-5ed Susan, with a comment about Ted being in for a world of hurt.

Elliot and Tedd (both male).

How about adult Elliot and adult female Tedd!

I bet you'd like to draw Tess and somebody, probably Elliot (ha late answer).

Weirdest I can think of and conversely best: Vladia and mild-mannered Elliot

ooh ooh ooh, No I correct that! I want GRACE AND JEREMY !! YAAY for a catty date :D

Ehh.... I guess Grace and Sarah would be alright... I really can't think of any other options that don't seem stupid

Depending on your definition of "couple," my vote goes to all the girls. If that's too out of bounds, then Sarah and Grace, you need to make another "dawwwww, how kyoot" moment.

You didn't specify a human couple, how about Susan and Jeremy? Perhaps a (fully) cat version of Susan. Not kissing or anything, of course.

But I doubt many others would suggest that.

Justin and Noah! Let's face it, the cute would melt people's eyes!

I vote for Noah/Justin for the non-canon couple o_o

Justin/Susan :3...Though I hear of a Jeremy/Susan idea going around and that would be hilarious XD

I'm not sure if I already voted, but Susan and Justin. They were cute together during the birthday party.

I want to bring back Male Susan and Female Justin. If only for just a moment.

how about Susan and Justin TFed into Elliot and Ellen clone-forms?

that alternate universe chick / her devitcery diamond clone with from slight aestetic modifications.

Just to be weird, Wolf and Lavender.

susan and "the playah"/theater clerk

Anyways, Tony/F-Playah. Should be fun.

How about Susan and Sarah for the next sketchbook entry? :)

I wanna see Susan and Sarah. <3

I'd go for Tedd with Sarah.

The more I think about it, the more I would love to see a pic of Susan and Tedd together.

Tedd and Tony! It's weird, but there's got to be at least one alternate universe in which they somehow became a couple!

Mr Verres and a Urory-- uh, Ourori-- ummm... one of those little aliens.