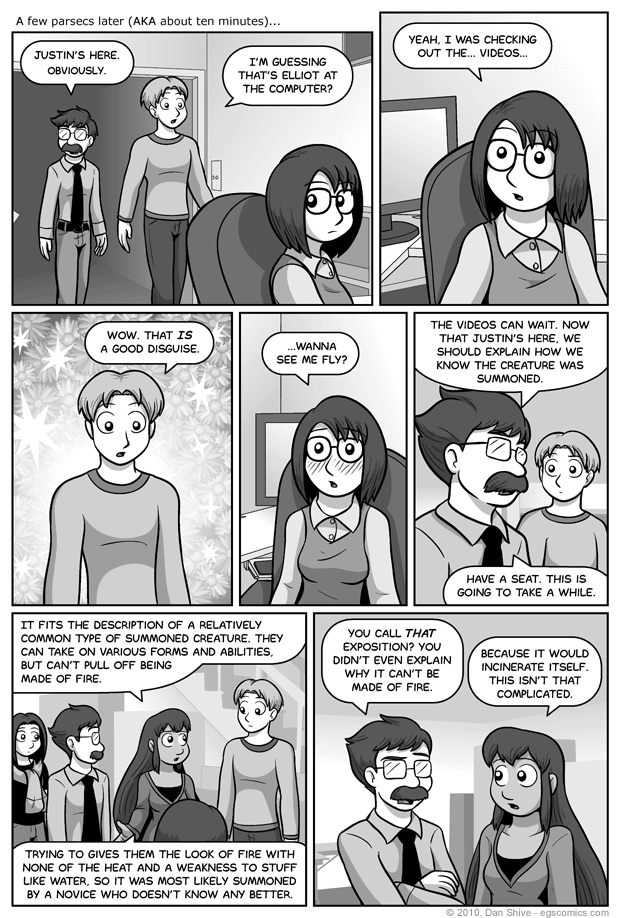 It's been a while since I've done a "they're so hot they make flowers appear" panel. I'm not sure when the last one was. It was probably during Grace's birthday party, but I might be thinking of a flowerless variant. This one's a bit of an upgrade, too, with added sparkles!

Wait... does that make Justin a vampire?

Anyway, I mentioned in a previous comic's commentary that Mr. Verres had evidently given several barrels of exposition to Tedd and Grace before Elliot got there, and that this would help save time on exposition later.

So, I knew then that the explanation for their conclusion would be made shorter, but I didn't realize it would fit in one panel. Yeah, she left out the "it would incinerate it" part, but I still could've fit that in one panel.

As for the parsecs comment in the first panel, it originally just said "shortly". I decided that was boring, so I did something totally original and poked fun at Star Wars. As any Star Wars nerd will eagerly point out, parsecs are a unit of distance, not time, but Han Solo used the term as though it was a unit of time in the first movie in his first scene.

Of course, a SUPER Star Wars nerd will give you one of no less than three possible explanations as to why Solo saying parsecs makes sense. One of them involves being willing to fly in close proximity to a black hole and not having died in the process.

Wait, I'm not a super Star Wars nerd. Why do I know that? That would be like knowing that Han Solo was originally going to be a non-human Jedi who WHY DO I KNOW THESE THINGS?!