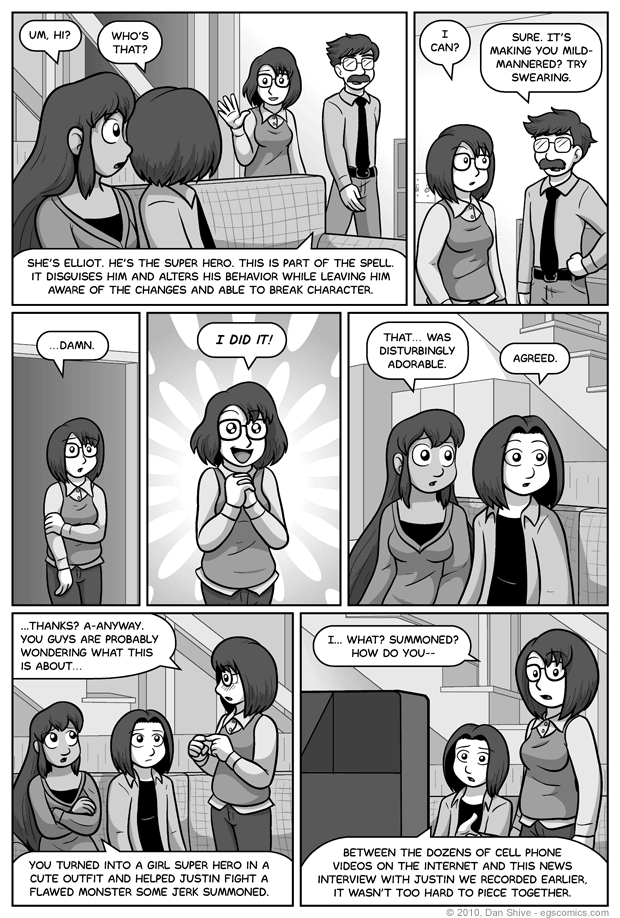 Posted November 3, 2010 at 1:00 am
Elliot's current mental state really isn't all that scary to me. Frankly, I see that as day-to-day life. We all have those instincts and impulses that are contrary to what we ultimately believe to be logical and proper. I myself have many traits that are contrary to what I think is reasonable. If my instincts and impulses changed somewhat, but I still had the same mind behind them, I suspect it would feel more familiar than one might care to consider.

...I think I described that as confusingly as possible. Um... long story short. If I had a spell similar to Elliot's, I'd be cool with it, and probably want other similar ones due to not seeing it as being all that different from what I already go through daily with the whole id, ego and super ego dealie.

One who is paying close attention to the dialogue will note that Mr. Verres basically revealed that they knew about the incident in the comic shop in panel one, but it went over Elliot's head. That line not immediately clicking for Elliot is realistic in my opinion, particularly given the situation, but I'm sure there's at least one person out there who disagrees with me. Hello, disagreeable person!

I've pictured many variations of how this scene could play out, but this is the only one where the "summoned monster" theory is revealed this fast. It was originally going to come up for the first time later, but it occurred to me that Tedd, Grace, and Mr. Verres have all been talking about this situation prior to Elliot's arrival. This also means that it will be easier to cut to the chase of whatever barrels of exposition Mr. Verres threw out, so I'm calling it a win-win.

Hey, remember when I mentioned compulsions and impulses earlier in the commentary? Well, I was about to add this commentary with only four panels, and that seemed wrong to me, so I'm writing this. I blame the five paragraph essays from back in my school days. If I had a spell that could mess with that sort of thing, maybe this commentary could've been four paragraphs of genuine content, but no. We have to have this paragraph. Whee...