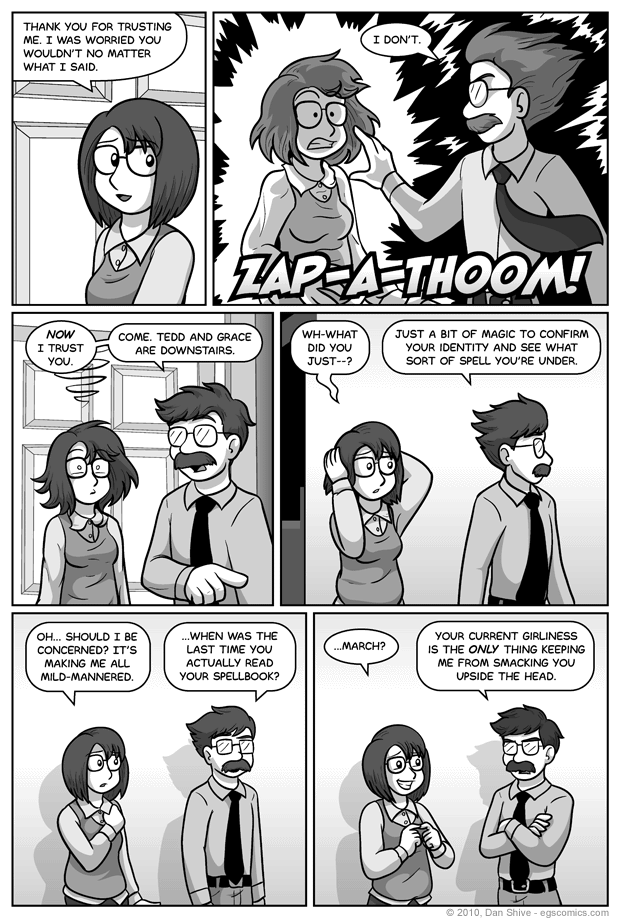 Posted November 1, 2010 at 1:00 am
Zapping runs in the Verres family. The functionality of said zapping does seem to vary greatly, however.

Before anybody judges Mr. Verres too harshly for zapping poor cute mild-mannered Elliot, consider just how many reasons this man has to be paranoid in this situation. Before you judge him too lightly, however, recall what happened the last time someone messed with his family.

For those who haven't been paying attention to the dates in the narration boxes and yet paradoxically read these commentaries, it's April 9th in the comic's universe. This means, at best, it's been over a week since Elliot's actually looked at his spellbook. The most recent day he probably looked at it was March 30th.

Elliot is adjusting his collar in panel five, by the way. I accidentally didn't draw it as ruffled as it should have been in panel four, and it sort of looks to me like instead of adjusting his collar, he's... well, I don't know what to call it, actually. When you swing your arm with a fist and are "gung-ho" about something? Is there a term for that? Is it one I have known, but now escapes my grasp as though it were some manner of elegantly greased pig?

Well, whatever, He's adjusting his collar.

I went with the angles I did in the last three panels in order to show both of them evenly, but I really do hate it when the background is a white wall. I wasn't being lazy there, either. They're in a hallway, and there's nothing on that side of the wall. If the speaking order was different, or they were going in the other direction, I could've included a simply lovely closet door for flavor, but alas, it was not to be.

I suppose I could put up some photos in the hallway or something. Perhaps a large portrait of Tedd's mother... nah.