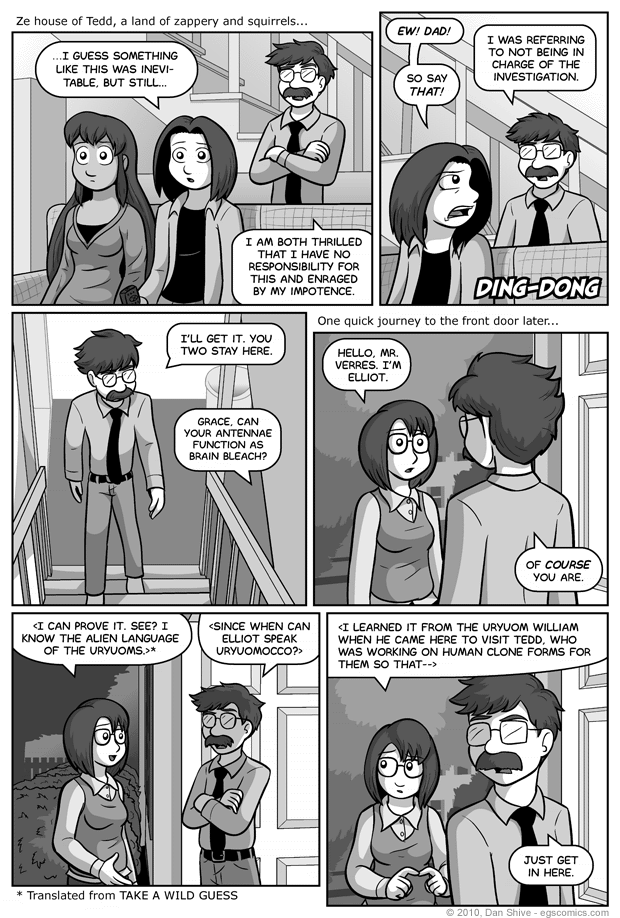 Posted October 29, 2010 at 1:00 am
I think Mr. Verres was momentarily possessed by Gumby in panel three. That's surely not simply an instance of me poorly drawing something and failing at perspective. That's just absurd!

I wish I had a more EPIC! update after technical problems resulted in delays earlier this week, but at least there's STORY PROGRESS! And TEDD! And MUTE GRACE!

Did you forget Elliot learned to speak the alien language? It doesn't come up much, but he did.

It's worth noting that I just went ahead and translated the "language" for this comic, and there's good reason. Back in the day, I used a character-by-character replacement code to make the language, which allowed people to translate hidden messages. It was sort of fun and "cool", kind of like lite version of the Klingon language.

As potentially fun as that is, I look back it as as pretty poor storytelling. When presenting a foreign language in a comic, I think it's best to consider a yes or no question: Do I want the audience to understand what's being said? If yes, translate it. If no, present it as gibberish.

Otherwise, one is giving people who know the language and people who don't a different experience. If that's what one is wants to do for some reason, great. My Name Is Earl had hidden messages to the fans on multiple occasions when one of their characters ranted in Spanish. As far as EGS goes, however, if it matters to the story, I think I should stick to everyone, or no one, being able to translate it.

It's an amalgam, darn it!

This comic is an odd amalgam of compressed and decompressed sequential storytelling, which is another way of saying that it sorta fails at both. I'm fine with that given that this comic winds up effectively being two three panel comics in one, but allow me to elaborate.

Basically, I feel like there should be one or more panels between three and four. It feels wrong somehow to jump cut to the door being open, like there should be a shot of Mr. Verres in the hallway after exiting the basement, and showing him opening, or about to open, the door.

This is an instance, however, where the fact that this is web comic that updates by the page and not a print comic dictated the lack of those panels. As much as I care more about how it will look in the archives than the day-to-day, I think it would be a much less satisfying update if I added those panels and wound up ending on the SHOCKING REVEAL of mild-mannered Elliot at the door. If it was anyone other than Elliot, maybe, but it's exactly who one would expect it to be. Not exactly the stuff of krak-a-thooms, there.

I'd be curious about people's thoughts on this, but for the moment, at least, I stand by my decision to trim the panel fat here.