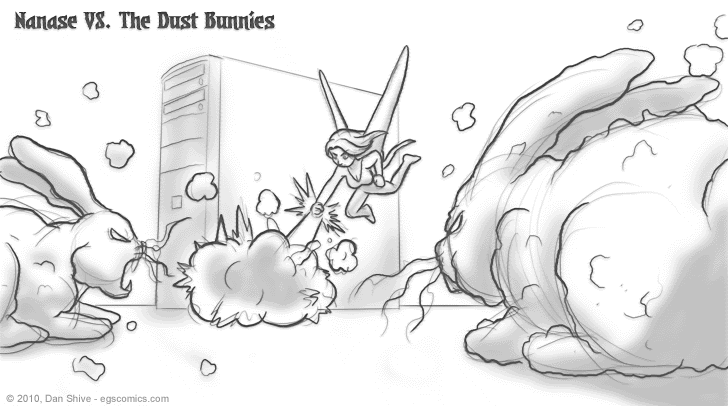 Posted October 28, 2010 at 1:00 am
Okay, so my "battle" with dust mucking up the fans in my computer wasn't quite as epic as fairy Nanase fighting dust bunnies, but it sure was close.

Dust was apparently causing components within my computer to overheat, primarily the video card, which I'm confident in claiming as the problem given the computer is working a LOT better post-cleaning.

I still don't completely trust that the computer is hardware issue free, however. This buildup was something that happened over time and my performance was evidently being hampered before I realized it was a hardware issue. It was one of those gradual things where I only now realize the performance impact it was having even before things got really bad. As such, it wouldn't surprise me if something was damaged during that time.

This "not completely out of the woods" theory is supported by an unexpected shutdown earlier. I was out of the room when it happened, so I unfortunately don't know what happened. All I know for certain is that Photoshop was open and I saved beforehand (if I hadn't, you'd be looking at a slightly different sketchbook entry right now). It might just be one of those glitches that will rarely, if ever, repeat itself, but its timing is disconcerting.

So, basically, I'm going to keep an eye open for issues, save and back up often, and do my best to not overstress the video card. At the moment, though, it looks like I'll be able to get comics done without too much difficulty, so short of a major unforeseen issue, expect regular updates again starting this Friday (AKA tomorrow).