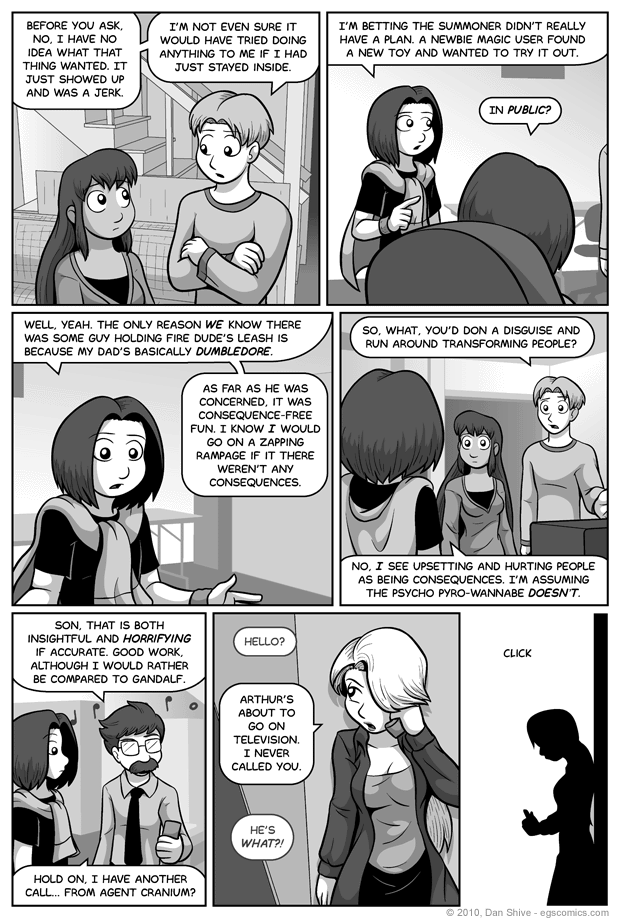 Posted November 25, 2010 at 1:00 am
If you're about to scramble through the archives in the hope of finding a comic with this "Arthur" character, don't waste your time. He's in the archives, sure, but this is the first mention of him. Even if you found him, you wouldn't be able to confirm it's him just yet.

Given the circumstances, however, I do believe there's enough information available that one could give an educated guess to who he is and be right.

It's probably not a surprise, but I agree with Tedd's view on consequences. There are many things I don't do that I would do if they were consequence free, but that's not the same as saying "if I could get away with it". Causing harm to others, even if no harm comes to me, remains a consequence (this is why I don't put on a ski mask and run around hitting people with fish).

I actually see this as a pretty good crazy bastard litmus test: "If you could do something fun that hurts people and never be held responsible for it, is that act free of consequences?" It quickly collapses into an argument of semantics, but I think the intent of the question is clear.

I like how Cranium turned out in panel six. I've been trying to get better with anatomy and drawing folds in clothes. One of the weird side effects is that Tedd, the only character in the scene with his forearms exposed, is looking strangely more fit to me. Technically, he is being drawn with a little more definition than before, but it's more artistic evolution that Tedd using his Wii Fit for its intended use.