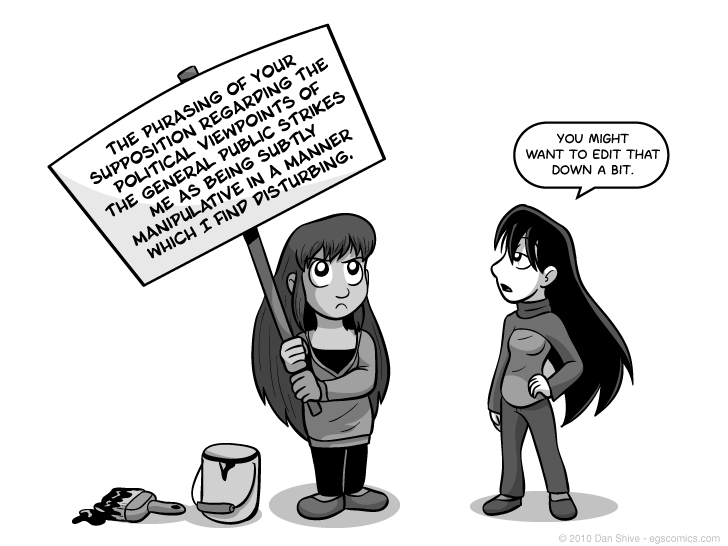 Posted December 9, 2010 at 1:00 am
Before I get all commentative on this sketchbook comic entry, I feel I should spread the word that I'm doing a poll via the Twitters that will impact next Tuesday's sketchbook. I will accept poll answers through 12 pm Eastern US time Friday. Here's the poll:

Which non-canon (not together in the plot) couple would you like to see in an upcoming sketchbook entry? I will draw the most requested one*

* I reserve veto powers on this, but will only use them with good reason. For example, I'm not drawing Elliot and Ellen as a couple.

This is similar to another recent sketchbook where I asked for suggestions, but this one's a poll. Whichever non-canon couple gets the most votes, that's who I'm drawing. So long as I don't feel the need to veto, anyway, but that's only likely to happen with a sort of "Luke with Leia" result.

Again, I will accept poll answers through 12 pm Eastern US time Friday via e-mail and, of course, the Twitters. And now, ze real commentary!

Those of you who follow me on the Twitters are possibly already aware of this, but there is a tendency among political commentators and the politicians themselves that grates on my nerves. If I may quote myself from Twitterville:

"I really frikkin' hate when political commentators say "the American people want ___". There is a HUGE diversity of opinions out there. (a) it creates further divide to claim one side is "the American people", and (b) THERE WOULD BE NO DEBATE IF IT WAS UNANIMOUS."

Point (b) is pretty self explanatory, but I want to elaborate on (a). When one says "the American people want ___", it's essentially implying that anyone who disagrees is un-American. This is irrationally divisive in nature and counter-productive to bipartisanship.

It's subtle propaganda (whether it's intentional or not) that's meant to get people to think the same way as the commentator or politician, and it accomplishes it in an irresponsible way. It is a cheap and manipulative method by which to convince people to pick a side. Not only should that be accomplished through logic and reasoning, but we live in a complicated world. There are usually more than two options.

Perpetuating an us-vs-them mentality divides us, and I'm pretty sure someone once said something about dividing houses and how it was detrimental to their ability to stand.

My "let's all get in a drum circle and work together" political views aside, Susan being in this comic giving advice was a no-brainer, as she's no stranger to making a stand. My reason for having Grace holding the sign was basically, well... the girl can be wordy.

I also think it makes sense that she would be supportive of everyone working together, and I can see her having some strong opinions now that someone's given her history books to read. Don't worry about her getting too political, though. If she starts to rant, we'll just throw shiny objects and/or Tedd at her.