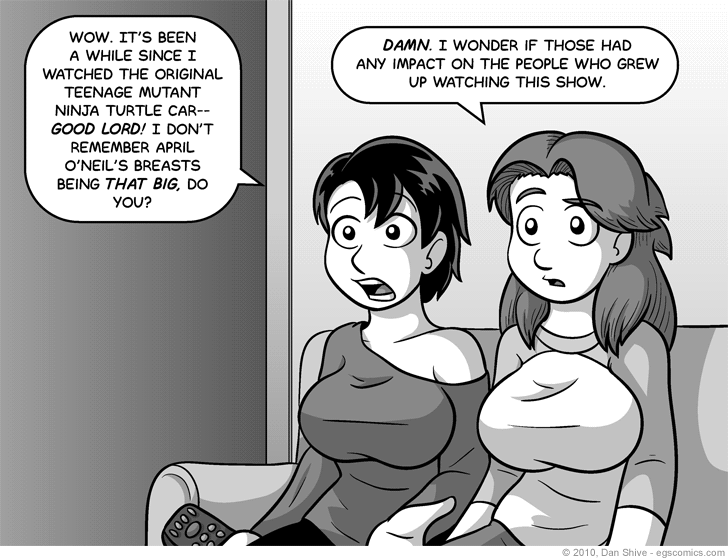 I was recently trying to decide whether I should pick up the first few episodes of the old Teenage Mutant Ninja Turtles series. This seems like it should be a no brainer given that they were a big part of my childhood, but nostalgia is a tricky thing and can result in purchasing things that will ultimately just collect dust on the shelf. Then again, it can also result in purchasing gems that will get watched frequently. I have yet to watch more than two episodes of my copy of the first season of Ally McBeal, but not only do I watch Daria frequently, I feel a strong connection to it.

Point is, I'm cautious about indulging nostalgia, so it was fortuitous when I discovered the Nostalgia Critic was doing a retrospective review video of pretty much exactly what I was thinking of buying.

There was a lot interesting stuff in the review, but I was honestly taken aback by how well endowed April was. I pretty much had Nanase's exact reaction, and it's not like I was specifically taking notes on April's chest. They were just impossible not to notice. I suspect April might be a distant relative of Dolly Parton.

I haven't linked to the video yet because it comes with this disclaimer: NSFW for reasons of foul, horrific adult language capable of flinging monocles from the brows of the social elite.

Okay, it's not all THAT bad, but it definitely has plenty of swearing (and some innuendo) that you'd never see on this site, hence the warning. That said, click here for the video review.

As for whether I think April's huge tracts of land had any impact on me, I can't be sure. If they did, they weren't working alone. I do know there are times when I draw breasts on character and others will tell me they seem large when I think they look normal or even small, so it's possible these characters had an impact on my perspective regarding cartoon bosoms.