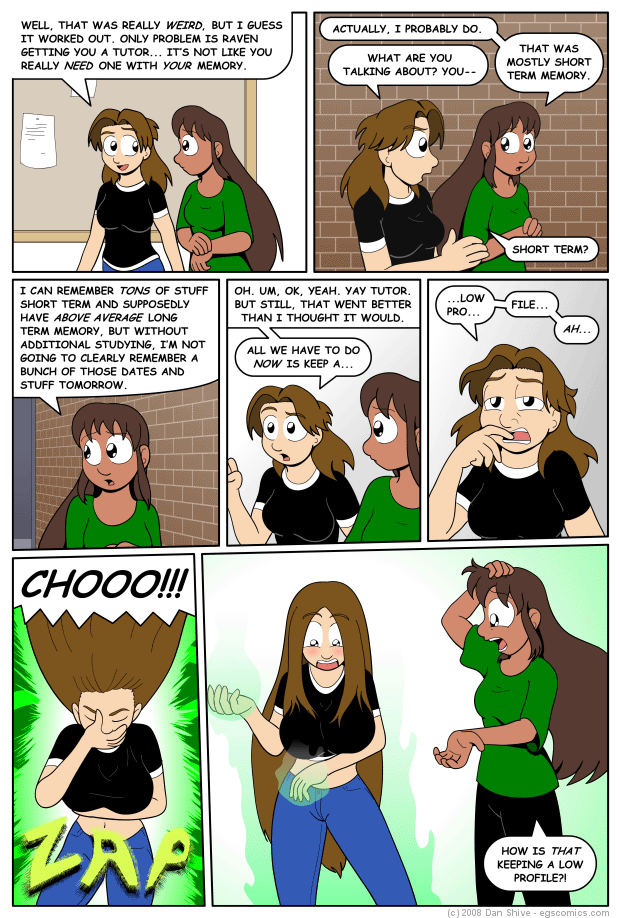 Posted April 11, 2008 at 1:00 am
The high school I went to was a mixture of an old building and new construction built around it, a sinister hybrid of ancient and new wave materials. As a result, there would be areas within the school where one wall would have bricks as though it were the exterior of a building, and others would look more appropriate for the interior. To the point, that is why one side of the hallway is brick in this and other comics. Both Moperville North and South reflect this aspect of my high school experience.

Grace’s short term memory basically puts her in a position to temporarily have expert recollection of pretty much anything without making her an infinite repository of knowledge. How exactly this works and how loudly psychological experts would groan at this aspect of the story is difficult to say, but it does open several doors for Grace.

As for the sneeze, this is something I’ve wanted to have happen for a while now. What exactly is the significance of a sneeze that results in zapping? That will be addressed later. For now, it is enough to know that Ellen has sneezed in such a way that has significantly increased the mass of her hair and bust. This happens regularly to several women I know, so really, I don’t get why Ellen is so shocked here.

If Ellen seems "larger" than previous incidents of her zapping herself with V5, this is due to my drawing style evolving and not some sinister enhancement of Ellen’s transformation beam.