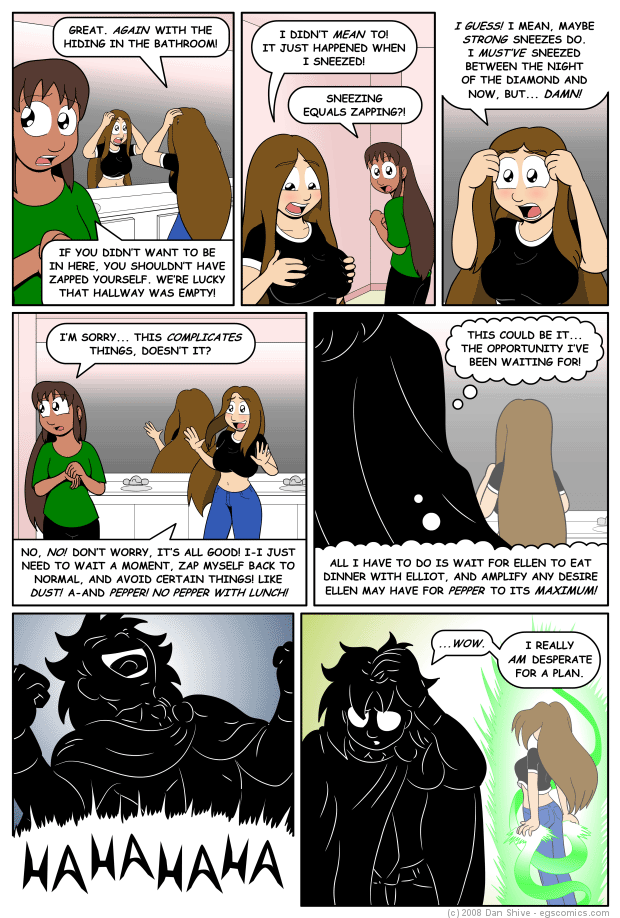 Ellen makes an excellent point here. She’s been around for a fair amount of time at this point, and should have had plenty of opportunities to sneeze. I don’t personally keep track of my sneezes, but I know it would be odd to make it a month without sneezing at all. So either sneeze suppression is a side effect of the Dewitchery Diamond, or something else is going on here.

Sneezing equaling transformation is something I’ve heard of being done before (particularly in anime and manga), as has sneezing equaling fire breathing, explosions, etc. I’m curious about how this would be handled in role playing games. Would there have to be saving throws made versus sneezing every so often? What stat would you use to make the save? I’d attempt to guess, but it’s been so long since my failed attempts to play D&D that I’d best just quit while I’m vaguely ahead.

What about in video games? Would there be a sneeze-o-meter that gradually goes up? Actually, that would link it to time, so it wouldn’t make much sense. Hazards within the game would work better. You’re making your way through a dungeon, and you figured out that you need to push the block onto the switch, but you forgot to do something about the dust and AH-CHOO! You’re transformed, or sneezing up fire or whatever.

That actually sounds like a cool game mechanic, to be honest. Make it a game where you’re part dragon, have to rescue hostages but need to avoid sneezing so you don’t hack up a fireball on those you’re sworn to protect. I can see the 7.5/10 on the game review websites already…

Incidentally, for those of you who consider the whole breast enlargement aspects of this overly explicit, it will please you to know (and infuriate others) that I cut back a bit on how risqué this comic is. Originally, Ellen was lifting up her shirt in panel five, and Magus was rudely obscuring the reflection that would have provided the frontal view. So really, nothing major would be seen either way, but the SUGGESTION of additional naughtiness would have been there.