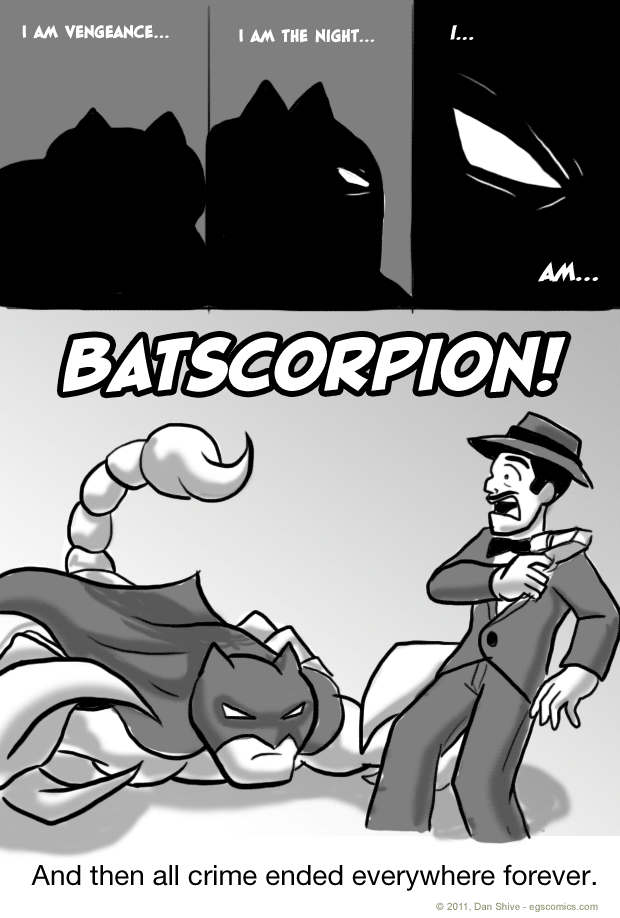 Posted February 1, 2011 at 1:00 am
One might claim this comic has nothing to do with EGS, but they'd be wrong! Look! It's that Silver Age guy! You know, I figured he'd be a one-time appearance, but I suspect I'm just going to find more and more excuses for him to show up.

This comic might require a bit of explanation. A game I've mentioned enjoying is Fallout 3. The game takes place about 200 years after a nuclear apocalypse, and you're wandering a wasteland full of mutants, raiders, giant insects, giant scorpions, and, well, even BIGGER giant scorpions, etc.

All of the scorpions of unusual size are supposed to be hostile towards the player. When I was playing for a bit earlier today, however, something weird happened.

I was fighting off some raiders when one of the giant-giant scorpions ran in, killed the raiders, and ran off. It ignored me entirely, and according to the in-game radar, it wasn't hostile. It just swooped in to save me from being mugged and left. It was like Batman in giant-giant scorpion form.

And that, my friends, is the origin of this horrible, horrible comic.