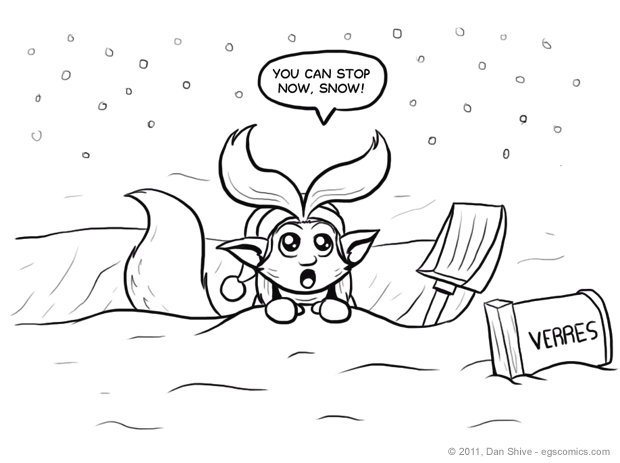 Posted February 3, 2011 at 1:00 am
Obligatory link to the previous Grace with snow comic from last year.

I am conscious of the fact that, as someone who lives in the Midwestern United States, I haven't had to deal with the worst winter has to offer. It is my understanding that the snow has been significantly more insufferable to the East and no doubt to the North, and I respect that.

All things being relative to each person's own perspective, however, I think yesterday was the most snow I've ever seen first-hand, and shoveling it took a lot out of me. Speaking once again in terms of relativity, I don't think I even shoveled that much. I'd say I shoveled a lot of heavy snow, but it was like denting an iceberg.

I would ultimately say I've been rather fortunate. People knew a blizzard was coming, took precautions, and we didn't experience any outages. Nonetheless, I woke up tired and graduated to exhausted rather quickly, and pretty much stayed that way all day.

Ultimately, however, my one regret is not stocking up on hot cocoa. I don't think I've ever wanted hot cocoa this much in my life. It may prove to be a passing fancy, but I predict the very first stop I make on my next outing will involve the acquisition of a large hot cocoa.