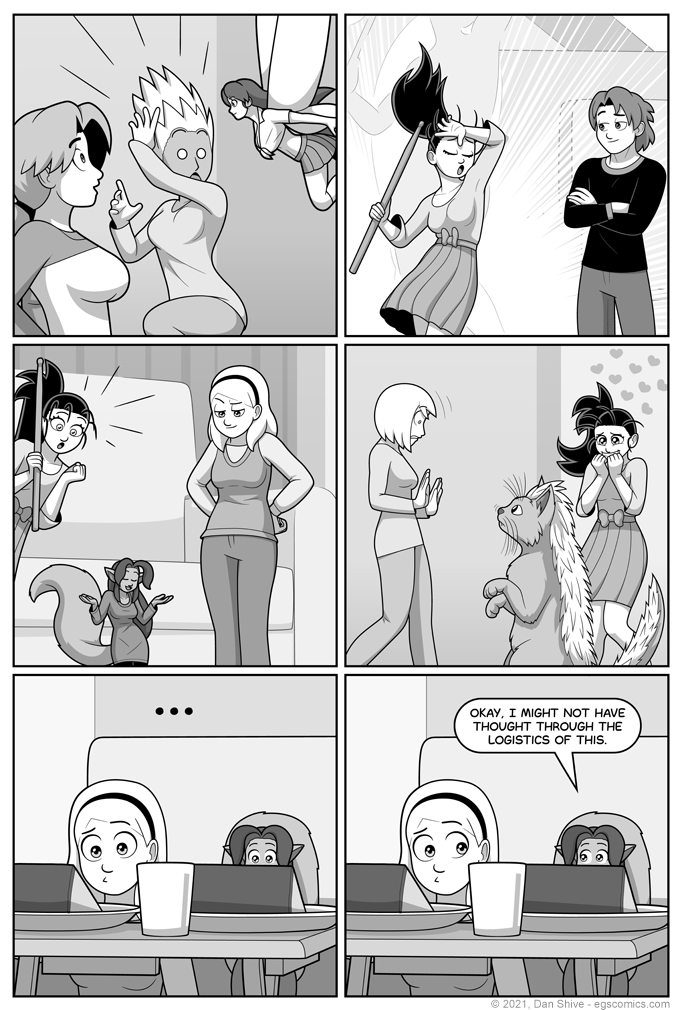 Okay! So! This page.

Up until this page, the plan had been that Grace's idea was a brilliantly brilliant idea of good fun that was perfectly balanced with no flaws whatsoever.

Even going into it, however, I knew that actually showing them eating the cake while half-sized was going to be complicated, and had been trying to come up with ways to simply imply that cake devouring had concluded.

With the decision to include Grace showing off and shrinking even more making its way into the montage, however, I decided it would be disappointing to not show Grace with her piece of cake, and it was roughly around that point that I realized why I had been so set on not showing the cakes actually being eaten:

I had no idea how they were actually going to do it at half size.

Holding the plates while eating? They're bigger than their laps. On dinner trays? They sit too low. On trays they could have on their laps? Those would be HUGE! And this isn't even to mention how they drink their drinks! Do they eat on the floor? That's still a long way to reach down even if sitting! Do they go full Ancient Rome and eat cake while lying down?!

Another thing is that I only fully accepted this reality partway through production, and I had to decide whether to gloss over it, or call out the logistical problems of it all. Obviously, I decided on the former.

This meant things in the montage needed to be moved around, but the panel with Jeremy absolutely had to be on this page, otherwise I might have moved it (if it seems like it doesn't contribute to the buildup to eating cake while small, it's because it doesn't, but I wanted to leave it in anyway).

Three of the first four panels were sketched, though not in the order they're in now. I didn't know what to do for the fourth one, and eventually settled on showing Ashley shrink herself. One may note that two of the other panels show an already shrunk Ashley, so I had to rearrange them. Panel two became panel one, panel one became panel three, and panel three became panel four.

As for the now panel two with Ashley shrinking, I thought her just shrinking was the most boring thing in all known recorded history, and was fervently trying to think of something else that could work instead, or just some way to make it more interesting.

I actually did a little dance when I realized I could callback Ashley expressing mock-distress over being transformed, which fits perfectly in something very important I want to convey right now: That Ashley is having a good time.

Really, I want to convey that everyone is having a good time at this point, which is sort of the whole point of showing this part of the party (and why it's not getting bogged down in a lot of dialogue and is instead focusing on visuals), and I intended to do more of that on this page.

The decision to actually address the issues with trying to eat cake at that size resulted in a bit of record scratch stop, however, so the music will have to pick up again on the next page after they quickly address that issue.

Ultimately, this works out for me, because it gets us past the cake objective, and to a point where things can just be shown for a couple pages before getting to back to proper dialogue and wrapping things up. There's not a whole lot to wrap up, and just showing certain characters having fun is its own form of wrapping, but there is a little bit beyond that.

After that, I'm taking a couple weeks off from sharing story comics. It won't be a proper vacation for me, though it will be a reduction in hectic-ness. A more proper break for me will likely come after the next group of storylines.

Tuesday EGSNP during the day