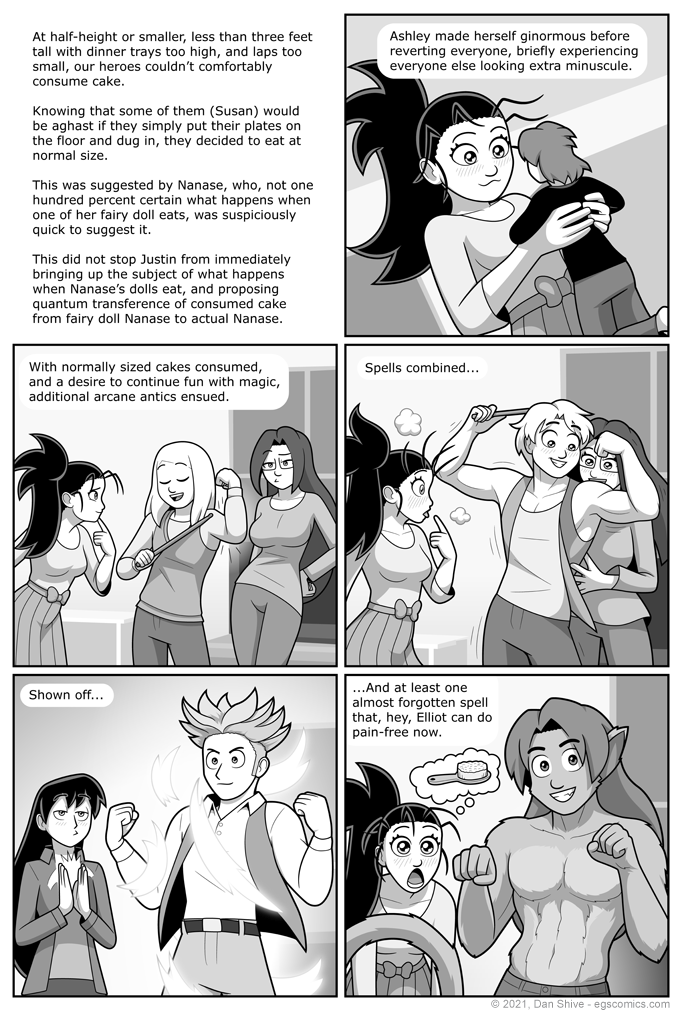 This storyline will continue next Monday, and we'll be at the point when I'm wrapping things up. There's not a lot I feel I need to put a neat bow on, as the next storyline will feel like a continuation of things after the party, but there are a couple of things in need of fancy bows on top.

With that out of the way...

And then something personal upset me and I couldn't focus on writing for a few hours. It wasn't anything too terrible, but it was enough to completely throw off my ability to focus on deciding what to do for the last two panels.

(This was one of several factors in this being posted absurdly late, another one being each panel that wasn't a wall of text being relatively elaborate).

But after THAT, I decided I wanted Susan and Justin on this page after they wound up cut from the previous one (Susan would have been shown wiping her mouth after eating cake, while Justin would have been a crumb covered catastrophe, the most tragic causality of me realizing the logistical issues of cake consumptions while shrunk).

Susan wouldn't really want to show off her own magic, so power up Justin won by default.

Something else cut from the previous page was a thought bubble with a brush in it from Ashley looking at Jeremy (I went with hearts instead). I also wanted someone, ANYONE other than Grace to represent furry transformations, AND I still wanted my extra beefy Elliot, darn it!

(I say this all like I don't know because, really, I don't. I won't know for certain unless it's ever addressed in dialogue. The above is what I'd most likely go with if I had to answer immediately, however.)

That amount of text in the first panel is the result of the narration I felt I needed taking up too much space to do much visually, but not enough to fill the whole panel. So we get a short story about Nanase being eager to chicken out of eating cake while using a fairy doll.

Tedd was originally going to suggest the quantum transference, but then I thought that would be an odd thing for Tedd to say without actual evidence. For a science fiction troll guy like Justin, however? Make it so.

As for how narration wound up happening at all, I felt I needed to make clear just what the issue was with the cakes, as the issues were evidently not clear, and some readers had a mistaken impression of just how small everyone was.

Some readers had, to my own curious confusion, forgotten that they could be shrunk to half height now, but remembered the previous limit of half volume (which would be around 80% height). Yay selective useless EGS trivia recollection?

That noted, Sarah was a mere 32 inches (81.28 cm) tall on the previous page. That's small all on its own, but factor in adult proportions, and that's REALLY small overall. To put things somewhat in perspective, half-height without changed proportions is a mere 12.5% volume.

Put another way, there's a reason 200% Volume Ashley (about 126% normal height) can easily lift up 12.5% volume Elliot. Granted, this raises the question of weight and how that works with presumably maintained (somehow) mass, but the answer to that is "magic", so there.

Speaking of giant Ashley, I absolutely wanted her to be shown, too, in order to give a sense of closure to Elliot's suggestion from a couple pages back (the suggestion made via pictures).

I originally imagined her simply doing that after they ate cake while shrunk, but then the whole realization about the issues with eating while that small happened.