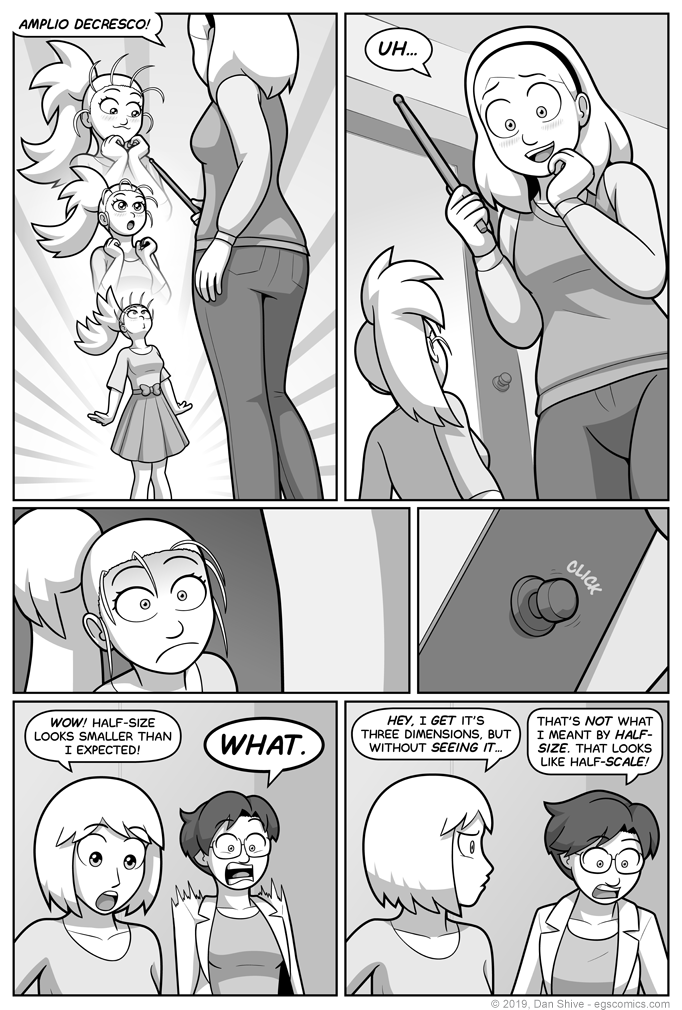 Sick Days - Woke up really early due to feeling awful on Tuesday. There was no way I was getting much done (and I didn't), and feeling unsure about Wednesday and Thursday, I decided I should postpone to Monday so I can be certain to get rest and recover, and/or go see someone if it persists.

And now I'm in this weird mental place where I'm rooting to feel perfectly fine tomorrow while also rooting to still feel bad in order to validate this choice. Brains are messed up.

Yeah, uh, that middle step in panel one? Yeah, that's already about 4.37% smaller than intended.

This will get touched on briefly in-comic, but in case there's any confusion, Diane reacted as she did because, after seeing the results, she assumed Tedd had been talking 1:2 scale. 1:2 scale means 12.5% of the original volume, so anything at 1:2 scale looks a lot smaller than that sounds (at least in my opinion. Maybe it looks exactly right to everyone else).

I'm not saying she definitely did the math or anything, just that she gets why Ashley would look so small at 1:2 scale while also being surprised by it.

I'm not 100% certain how I should phrase it, but what Tedd was talking about would have Ashley be about 79.37% her normal size (almost 80% normal height, but 50% normal volume). That's about 6.35 times bigger than she wound up.

So, I reiterate: Whoopsie doodle.