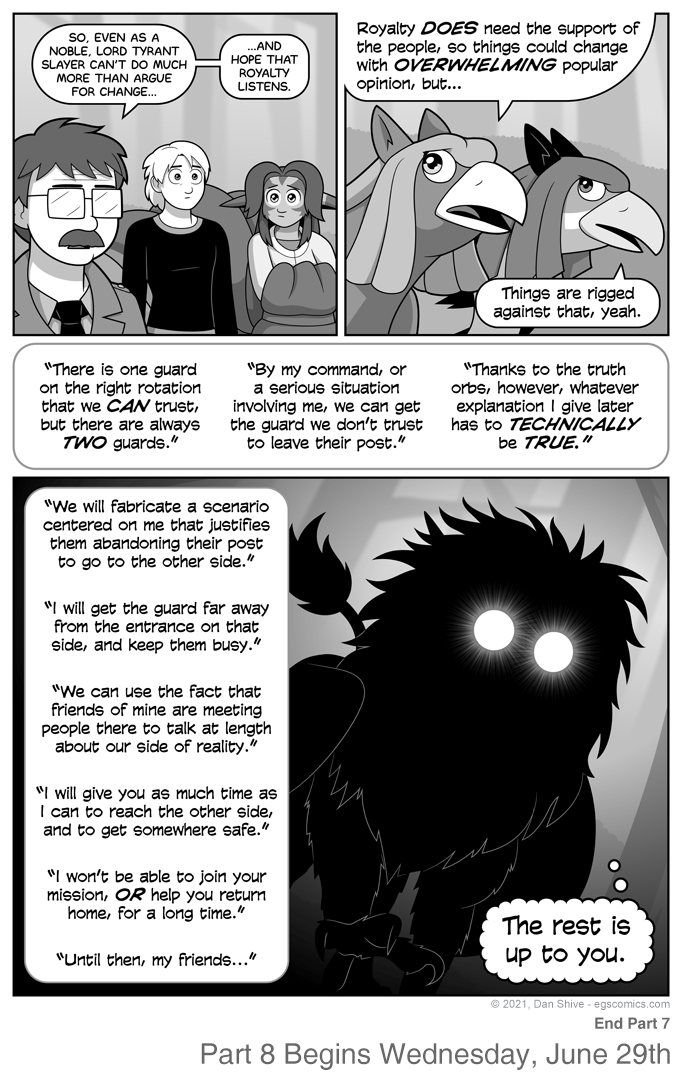 - The start of the discussion with Liam

- "(Virginia) practically BEGGED me to help retrieve you."

- Alarm at Dwight saying "we should go back"

- Cake of stalling + The blame is entirely on me

I'll be working ahead over the next week to keep comics on-time without destroying my sleep schedule!

I look forward to Part 8, in which we finally, FINALLY get into the matter of magic, and the clogging thereof!

Which sort of sounds like "up next, we get into plumbing", but there's more to it than that, I assure you.

What exactly "the rest" refers to is a mystery without an abundance of clues, but it was possible to deduce that the entire reason all of this happened was to get Dwight to abandon his post.

If you did, acquire a cookie of enormous magnitude.

Heck, acquire a cookie if you deduced ANY of this. It is a day for well-deserved cookies.

What this boils down to

Liam arranged his own mind being controlled in order to create a situation that would justify getting Dwight to abandon his post.

He arranged it in such a way that, if he had to testify under a truth orb, he could explain everything in a way that was technically true without revealing what the actual goals were.

For example, he presumably had whoever mind-controlled him actually catch him by surprise in some way.

The reasons for getting Dwight out of the way was so others, who are on some sort of mission, could get through.

There's more that could be deduced, but the three biggest clues were Liam caring which guard it was, his assistant (Virginia) being the one to insist Dwight go get Liam, and the existence of the truth orbs.

Seriously, without the truth orbs, Liam could've just been like "hey. Dwight. I'm a lord, and I need you to do a thing waaaaaaay over there for the next twenty minutes."