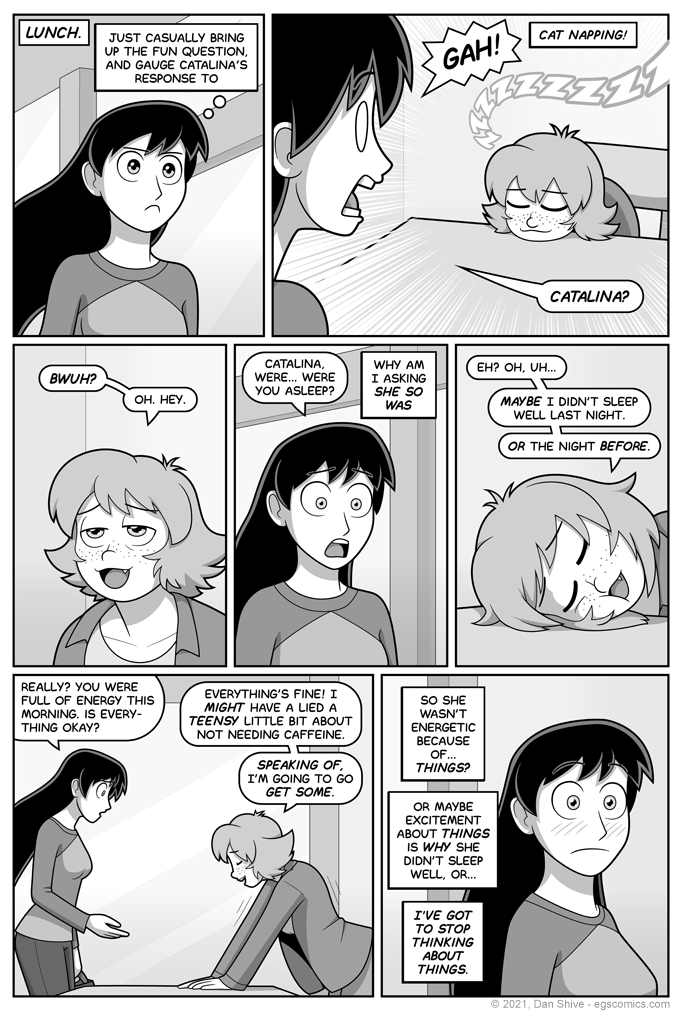 The following three references are all in a row, but I figured I'd maximize their convenience:

The Z's in panel two were the result of a bit of experimentation. Normally, I'd try putting text on a path (basically, the text will follow along an invisible line that doesn't have to be straight).

That wouldn't have looked how I wanted for various reasons, however, so I mad a brush of the Z's already distorted by a bit of perspective, and drew the Z's. From there, I add the outlines.

It's something I might do in the future to get extra wavy text. I actually tried out turning someone of Catalina's into brushes, but it seemed a bit over the top for the situation, and getting it just right with actual words is trickier. Odds are I'll experiment with it again if anyone's ever dizzy or something.

This page was delayed due to nothing technically to do with EGS.

What happened was, appropriately enough, trouble sleeping the night before last Monday's comic. This threw off my schedule in general, and I made it worse while working on the comic for Wednesday when I refused to accept a delay was necessary. I wound up staying up past three in the morning.

Which is something I've just recently gone on record saying was unacceptable. Granted, if I wasn't vulnerable to making that mistake, it wouldn't be an issue in the first place, but still.

Accepting I have to do something that will disappoint people is really hard for me to do. I think I need to focus on the fact that people will be more disappointed in me if I don't take care of myself, and that I set a bad example when I don't.