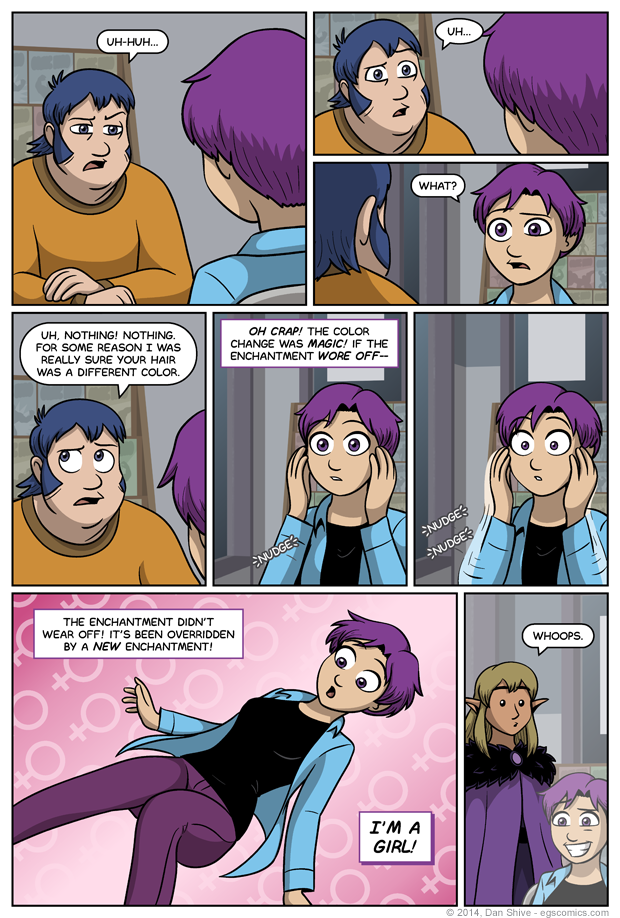 I had several reasons for showing an androgynous female Tedd earlier in the genderfluid comic. For one, I'd decided that Tedd's default female form should be as androgynous as her male form. For another, I wanted to establish that prior to this moment, giving people a chance to guess at it before the reveal.

Incidentally, the female Tedd in that genderfluid comic was on the right.

I very deliberately said nothing about Tedd's hair in the commentary for the previous comic as I knew it to be the sort of thing that many people might not notice right away due to how our minds work and how changes can slip by us unnoticed if we don't actually see them happen. I've had weirder stuff happen in the archives that people have told me they didn't notice right away for similar reasons.

While I suspect it worked to some degree, I nonetheless woke up the next morning to somewhere around a literal hundred messages asking whether I'd made a mistake. I had planned on not commenting on the hair at all over the weekend, but I was receiving so many messages that I had to say something.

To be fair, I was pretty much asking for that result, and it's pretty cool that that many people cared enough to contact me about it.

As for this comic, Panel seven might be my favorite drawing of Tedd ever.