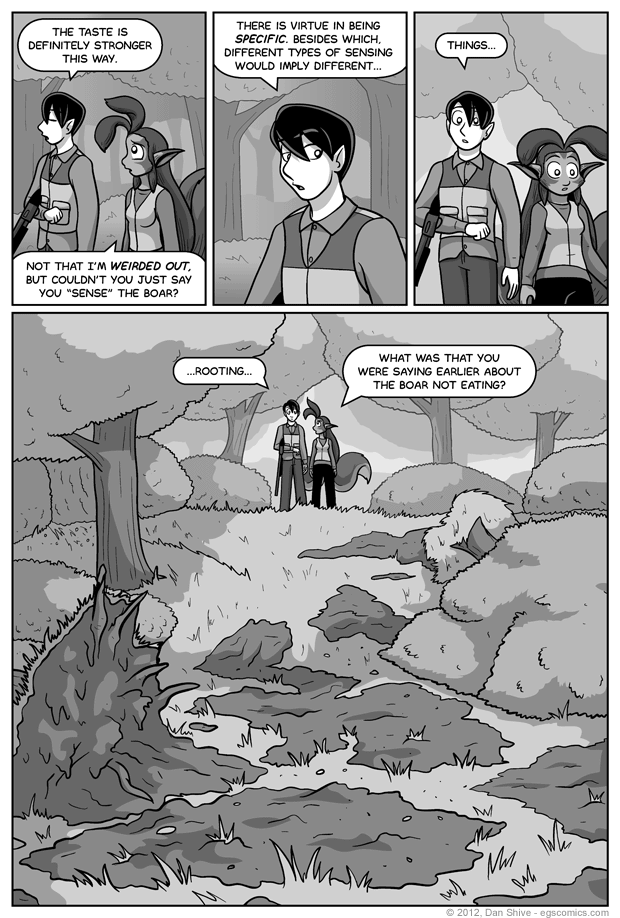 I agree with Raven about being specific to an extent. I frequently try to be as specific as possible to prevent people from hearing subtext that doesn't actually exist. This is usually pointless, however, as people often stop listening once they pick up on the slightest hint of a pet peeve or something they've been waiting to talk about and fixate on that instead of the actual point of what's being said.

Frankly, I'm glad he brought up the virtue of being specific, because I've just been waiting for an excuse to say all that. I'm not sure of anything he said after that, but whatever.

Since mentioning it in the previous comic, I have learned that the square-cube law has fans. It's not just some random mathematical principle I thought would sound cool to mention, either. It's directly applicable to a boar made giant.

Were the boar not in defiance of the square-cube law, it would tell Raven a few things. The boar's proportions would be different to support its weight and keep trivial bodily functions, such as its cardiovascular system, working. I imagine this would result in a bulkier, slower, but stronger boar.

The fact that it IS in defiance of the square-cube law, however, suggests that its proportions are unchanged, or changed in a way that doesn't necessarily make sense. Nonetheless, the enchantments are actively compensating for this fact, so even though the boar should have all sorts of problems functioning, it doesn't.

Amanda's shrinking is an even more extreme example of defying the square-cube law. Within the context of EGS, however, it would still count as a sweet-tasting sort of magic. Spicy would be messing with the laws of the universe beyond even that.

Fun fact: I had originally considered having Raven elaborate on pretty much everything I mentioned here regarding the square-cube law in the comic itself. I decided it really wasn't necessary to get in to in depth, but I want it on record that I put way too much thought into this.